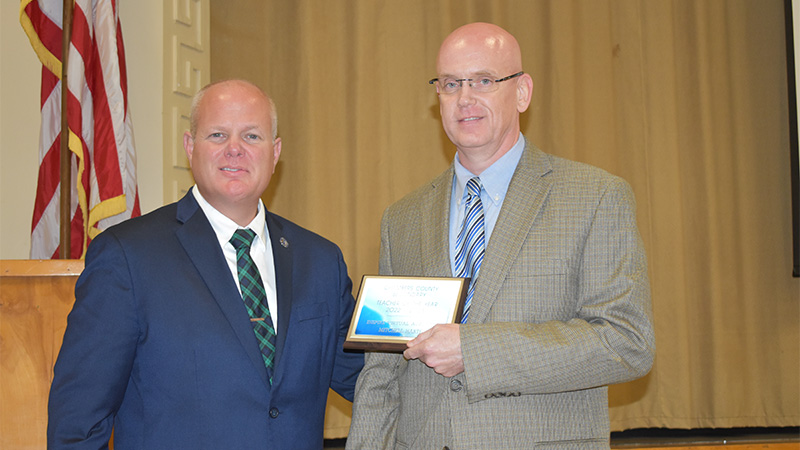 In his second year back in Chambers County, Inspire Virtual Academy Teacher Mitchell Harte has received the Teacher of the Year award.

“It was surprising, but exciting,” Harte said. “Of course, it’s always good when your peers recognize you for something that prestigious.”

Harte began teaching 25 years ago. He was inspired by his high school basketball coach and decided to follow in his mentor’s footsteps by becoming a social studies teacher and a coach.

After working with students who had disabilities in a group home, Harte also decided to get his master’s degree in Special Education.Because of this background, Harte is a firm believer in educational equity.

“I believe that all students should have not just equal, but equitable opportunity to learn,” Harte said. “That can mean different things with different students — just making sure that they have the same chances as everyone else. That’s where it starts, having the passion help students also having the patience to deal with difficulties.”

As a social studies teacher in a virtual school, two things that are at the forefront of Harte’s job are civics and technology.

What’s important about his classes is that his students learn how government works, Harte said. Along with that, he feels they need to understand their civic responsibilities and how to be responsible citizens.

“I think it’s important for them to be responsible citizens,” Harte said. “Government’s one of my favorite subjects because everyone is going to be a part of society and having that knowledge of how the government runs and what their responsibilities are goes a long way.”

Harte also reflected on how young people seem to have become more interested in participating in voting over the past few elections as well. He said that the indifference that young people sometimes have towards government may be shifting.

“I think that’s changing a little bit now with the elections that just occurred,” Harte said. “There were a lot of younger 18 to 29 year olds that voted in the polls than have previously, so that’s a good thing.”

Another shift over the years has been with technology, according to Harte. When he first began teaching, the use of technology in class was frowned upon and now his entire class is online.

“My first year in Lee County, I don’t even think we used email. It was kind of frowned upon if you had your computer open,” Harte said. “But now, that’s the first thing you do when you get to work. You have to turn your computer on, clock in using the computer and you have to monitor your email all day long.”

Still, Harte said that technology can have its drawbacks for the students.

Doing online classwork allows the students to work at their own pace and on their own schedule. Unfortunately, if they need help, their teachers may not always work on that same schedule. With the freedom of asynchronous work comes the responsibility of self-motivating.

“We’re only available during school hours, but they can work anytime a day,” Harte said. “That’s a good thing for them, but with a lot of students, the way they schedule their time really puts them behind. They just don’t set aside enough time to do the courses.”

When he realized that Inspire Academy’s virtual school was going to have a Teacher of the Year award, Harte was very surprised that he had won it. He felt honored and inspired by his colleagues.

“I was honored. I’m a little shocked,” Harte said. “My colleagues and peers are inspiring as well.”

Harte also said that he is grateful to his wife and daughter for their support. His daughter is currently studying special education at Auburn, continuing the legacy.

“They keep me going,” Harte said. “And the students have always been a reason to help me come back every year, just wanting to help them be successful.”