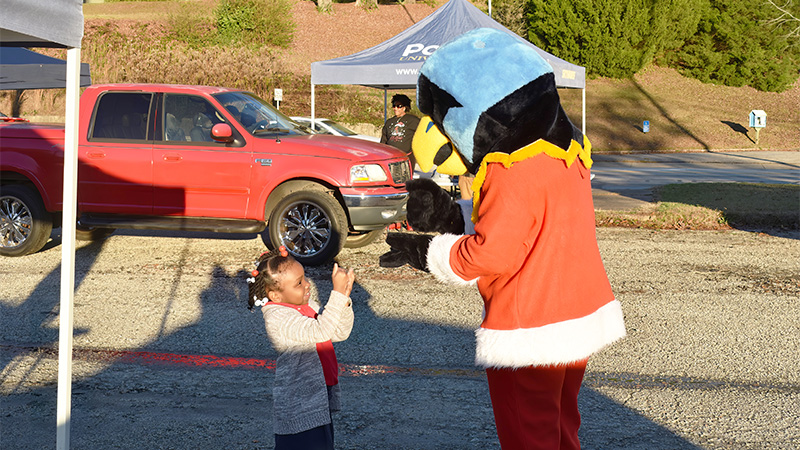 Over 65 families received a turkey or ham and food bags from the Point University and New Dimensions Worship Center Holiday Food Giveaway partnership in Valley on Thursday.

More than 50 households preregistered for a ham or turkey, but at least 15 other cars stopped by throughout the event.

“Our overall goal today is just to bless as many people as we can. We want to run out of everything we’ve got,” said Assistant Dean of Students Illya Lawrence.

Students, faculty and staff at Point University, as well as members of New Dimensions, donated over 100 hams and turkeys, according to Lawrence. Families also got food bags containing canned and packaged food, like macaroni and cheese.

The giveaway was run by around 12 to 15 faculty, staff and students from Point University and 10 members of the New Dimensions Worship Center.

“What we wanted to do was to exemplify the true definition and action of partnering … We didn’t want to just invest verbally or geographically. We wanted to contribute to the cause. That way, when we say we did it, we really did do it,” said New Dimensions Bishop Donald Lancaster.

The event was headed by Lawrence, Lancaster and Director of Campus Ministry Jon Reynolds.

This is the first Holiday Ham Giveaway that Point University has held. Lawrence said that he got the idea from an event that he holds in his hometown.

“I decided to bring the idea up here to bless some families in this area as well … For one, it takes a village, and it also takes a bridge, so we’re trying to be the bridge from Point University to the community,” Lawrence said.

Lancaster, originally from Lanett, said that he reached out to partner with the university to make an impact on the community through service. The bishop said his church includes a lot of younger members, and he wants to give everyone opportunities to give back.

“In order for our communities to unify, we have to come to an agreement on the one thing that most of us agree on, and that is the Bible … We should be able to come together, respect each other’s views and figure out what we can do to save our community and youth,” Lancaster said. “Our traditions sometimes keep us divided so that we don’t come to the table and discuss effective solutions to our problems.”

Director of First Year Engagement Chase Dial, who also volunteered at the giveaway, said that his goal is to get students engaged with the community by serving.

“It’s building that bridge between the students and the community, so they’re not just going home on the weekend,” Dial said.

Ava Clay, a freshman, and Esperanza Aguilara, a sophomore, volunteered for the giveaway. Aguilara and Clay said they enjoy giving back to the community, especially during the holidays. Aguilara is a member of the Student-Athlete Advisory Committee, which encourages students to participate in community service projects.

“I think it brings more energy,” Aguilara said. “We can relate more to the younger community.”

Lawrence and Reynolds hope to continue building connections with local churches. Reynolds hopes the partnership between the college and the church will help integrate students into the fabric of local, diverse churches.

“We’re trying to reach out to other diverse churches in the community so that students will have multiple options to find a home,” Reynolds said. “Mr. Lancaster’s is another church that’s on a major highway, and he has an African American church that worships in that style, and so we want students to be able to go there and connect.”

Lawrence said that his goal is to see the event grow every year. Eventually, he’d love to have 1000 hams and turkeys to give away.

Dial said service events like this also get people used to seeing Point represented and engaged in the community. Point also held an Easter Food Drive with Easter baskets for children and a $500 scholarship for a student, according to Dial.