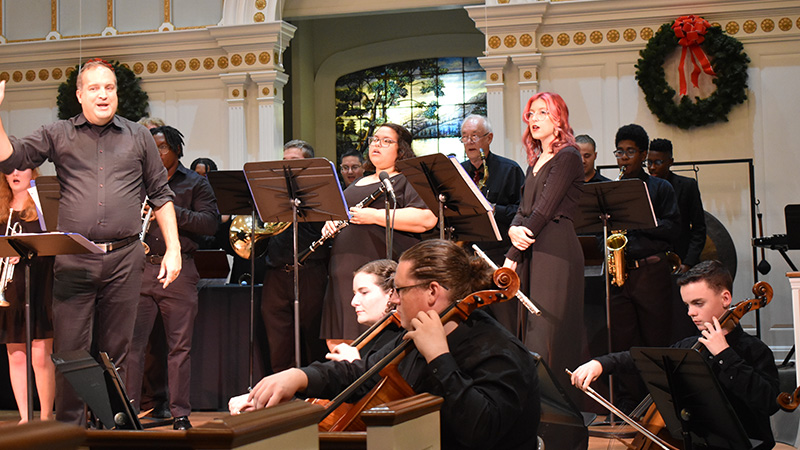 Choir and clarinet performer Maddie Williams performed in the concert for the second year. She said the choir and band students have been practicing for the concert four days a week since October.

“We were singing Christmas songs on the day of Halloween,” Williams said.

Point Percussion student Eli Dupriest has been performing in the concert for three years. He said that having a short time to prepare helped prevent him from procrastinating.

The Point Christmas concert is an opportunity for students to share their gifts with the community during the holidays, which is what Point University is all about, Williams said.

The first performance of the concert lasted from 6 p.m. to 7:30 p.m. during which time Point students and faculty performed traditional and gospel holiday music to a captive audience. The finale included a choir of sing-along Christmas songs.

Dupriest said the event gives the community the chance to come together — not just with each other but with the college as well. The percussionist added that the concert allows Point band students to represent Point University as a whole.

The Point Christmas concert has become a community event to mark the holiday season as well as a chance for Point students to give back to the community in their own way.

“It’s a really big staple in the West Point community to signal Christmas is here,” Williams said. “It’s a big marker on the calendar that a lot of people come to. I think we were packed out tonight.”