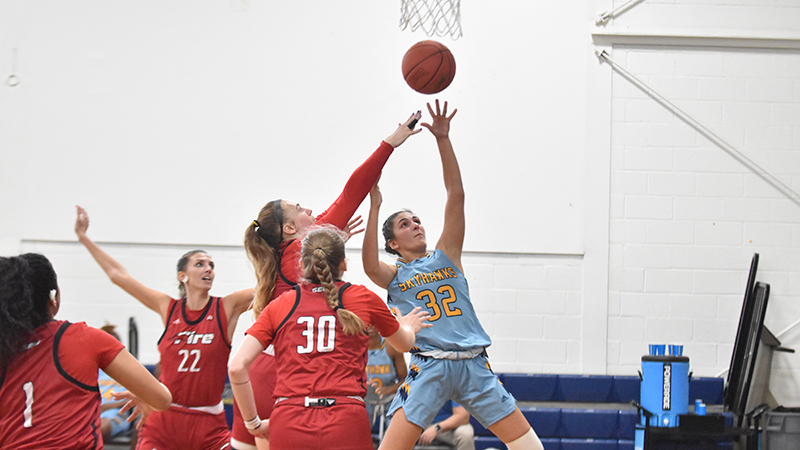 Point University point guard Marta Gimenez is an international player from Barcelona, Spain, but she’s made a name for herself in West Point as she reached her 1,000th career point in the Skyhawks’ win over St. Andrews last week.

Gimenez has been a Skyhawk for the last three years, and she’s fought through COVID years to record her 1,000th career point.

Gimenez explained how she became a Skyhawk.

“I was very grateful that I got to meet coach Tory [Wooley],” Gimenez said.

“2020 was kind of a crazy year because of COVID. You couldn’t go to tryouts because of lockdowns. I met coach Tory through Facetime. I was very excited. 2020 was rough with classes being online. I’ve had a great team every year I’ve been here. I had two other teammates who scores 1,000 points. I was very impacted by that, and that made me want to do it. It’s been great overall.”

Gimenez went into the St. Andrews game knowing she had the chance to hit 1,000 points.

“I knew it was going to happen because I had friends who were counting the points, so that’s very cool,” Gimenez said.

“I knew I was two points away, but I was very nervous. I needed to score a layup. I don’t think the way I scored it could’ve been any better. I got a layup plus an and-one. Coach Tory called a timeout, and it was very special. I felt happiness. My family was back at home, so I couldn’t celebrate with them. I called them after the game. I celebrated with my teammates and friends. Seeing the cr0wd go crazy was very special.”

Gimenez decided to come to the United States to receive an education while playing basketball.

“I wanted to go to college and play sports, but back home it’s kind of difficult,” Gimenez said.

“You don’t play sports at the university. It’s two completely different things. Here, if you have an away game, the teachers will help you make up for the homework or tests. At home, you deal with it. It was the best choice for me since I wanted to play basketball at a high level.”

Gimenez doesn’t know what she wants to do after college, but she is pursuing a degree in child and youth development.

“I have some ideas, but I want to go back home for a little bit since I’ve been here so long,” Gimenez said.

“I go back and forth during the summer, but it’s not the same as spending a whole year with my family. I have an older sister too. I’d like to stay here too and play for a team or find a job. I’m not sure yet.”

During COVID, Gimenez was able to spend time with her family in Barcelona.

“I left my junior college in Texas around March because they were closing the borders in Europe,” Gimenez said.

“My mom wanted me to leave, and I wanted to be with my family during lockdown. I didn’t come back until August. The streets in Barcelona were empty. I had never seen anything like it.”

Gimenez is excited to have a successful senior season and be a part of a team that has won five straight games.

“We’re still figuring it out, but we’re still coming together as a team. We know how each other plays better than we did at the beginning. We went through some adversity. I got injured, and I missed three games. It’s been kind of rough, but our teammates stepped up.”

“I was very nervous, but now I can just calm down and play my game,” Gimenez said.

“I can be a leader on the court like I always intended. I would like to thank coach Tory and my teammates and family. They always have my back. The fact that my friends were counting the points makes me feel loved and appreciated. I’m just very blessed.”

Gimenez is focused on helping the Skyhawks win their conference.

“We’re trying to get a ring,” Gimenez said.

“Now that I hit 1,000 points, my plan is to get a conference ring. With the games we lost, we’re going to get those teams back.”