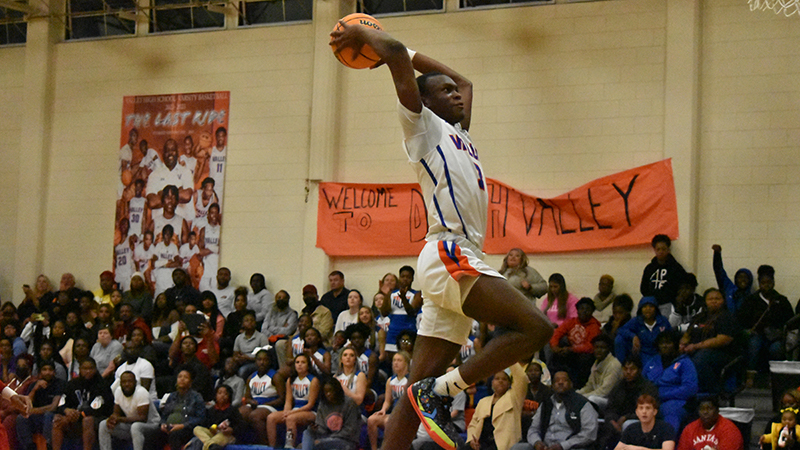 The score doesn’t tell how dominant Valley was in its 66-52 victory over the Loachapoka Indians on Tuesday, but the Rams have now started 9-0 for the first time under head coach Marshon Harper thanks to 35 combined points from Brandon Thomas and Cam Dooley.

Harper is extremely proud of how his team has been playing during their nine game win streak.

“They work hard all the time. They have positive attitudes. We talk about winning a championship, and that’s what we’re trying to do. We’ve been practicing for this for a long time. We just have to play hard each game.”

Harper is glad to have his first 9-0 start as a head coach.

“It means a lot,” Harper said.

“You don’t work to lose. We’re trying to instill a winning mentality. We executed tonight. We do this stuff every day in practice. Our best game is when we scrimmage each other.”

The first half was an absolute clinic for the Rams, who put on a show in the first quarter.

The first basket of the game was a dunk by Brandon Thomas, and he finished the first half with four.

Five out of the Rams’ first seven baskets were dunks, and Valley made its presence known early.

The Rams took an early 4-0 lead, but the Indians hung on as best as they could.

Two three pointers from Loachapoka closed the lead to 8-6 in the first quarter, but it was all Rams from there.

Valley went on an 8-0 run in the middle of the first quarter, and they continued their success of disrupting passing lanes and carving through the Indian defense.

The Rams took a 20-9 lead at the end of the first quarter even with Jay Harper holding onto the ball for the final 30 seconds.

The second quarter was more of the same as the Rams slowly extended their lead throughout the quarter.

A couple three pointers from Cam Dooley helped create some separation, and the Rams took a whopping 39-20 lead heading into halftime.

The third quarter was a chance to create an even larger lead for the Rams, and Valley did just that.

The Rams scored 16 third quarter points with six of those belonging to Brandon Thomas.

Valley took a 56-31 lead heading into the fourth quarter, and the Rams were able to put in their younger players.

Harper feels like his players’ football experience helped them on defense.

“We got Denali Dooley and Jamarious Martin to play football,” Harper said.

“It really helped them be aggressive. They’re really athletic. We’re going to get in your face and create easy buckets.”

Cam Dooley was the leading scorer for the Rams with 20 points wile Thomas finished with 15.

The Rams will have a quick break before they travel to Auburn on Friday to face Eufala in the quest for 10 in a row.