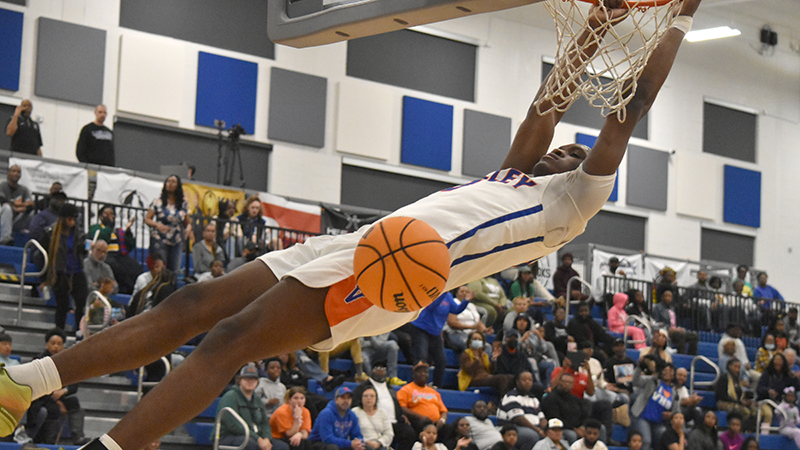 One might think that playing three games in three days would cause fatigue for Valley, but that wasn’t the case on Friday as the Rams dominated Carver-Columbus 77-48 to close out the year 2022 with a 14-0 record.

“They don’t want days off. They want to be in the gym. They’re loving it right now. I knew some bench people were going to have to play tonight. They played a good game.”

From the start, it was clear the Rams were in control of the game.

Not even a minute into the game, the Rams took a 7-0 lead.

It took Carver three minutes to even get on the board, and even then it was 15-3 Valley.

The Rams were able to lean on some of their bench players, and they took a 25-10 lead into the second quarter.

The offense continued to dominate with Cam Dooley and Brandon Thomas as the defense suffocated Carver.

Valley took a 45-22 lead at halftime, and the Rams never slowed down.

Harper credits his players’ conditioning for having energy during their third game in three days.

“The summer is paying off,” Harper said.

Harper is also pleased that his guys are having fun in their winning stretch.

“If you don’t love what you do, you’re not going to put your all into it. They love what they’re doing, and they love their teammates. We have eight or nine guys who have some really good chemistry. Brandon [Thomas], Cam [Dooley] and Jameson [Harper] are all playing well.”

The Rams only had one close game in their 14 wins this season, and Harper wants them to not get complacent.

Harper is impressed with how his bench players played.

“I saw how excited they were to get in the game. They did what they needed to do. I’m just proud of them. Sometimes, they should get a little more playing time. They bought into it, and they’re playing their roles.”

One of the most impressive parts of the win was Thomas’ windmill dunk in the third quarter.

“He practices it all the time,” Harper said.

“I’m glad he actually got one. I thought he missed it. He’s been doing a great job.”

Harper does have a New Years resolution for his team.

“We want to be an elite team at the end of the season. We can’t change our identity.”