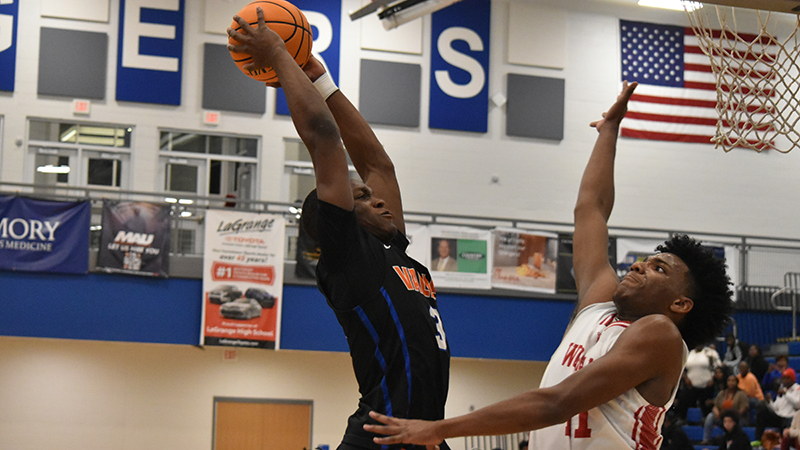 The Valley Rams traveled to LaGrange to face a tough Georgia opponent in Woodlant-Stockbridge, but the Rams were able to overcome a first half slump to win 69-58 and improve to 13-0 on the season.

Valley head coach Marshon Harper was thrilled with how his guys fought.

“They played hard the first half. They gave us their best shot in the first half. We came in the third quarter and took over the game. Hats off to that team. We needed that, so I’m proud of my team.”

The first quarter started out strong for the Rams as Jamarious Martin opened up with five points to give Valley a 5-2 lead.

The Rams played a game the night before, but Woodland’s offense was too fast for a normally stout Valley defense.

Woodland never held more than a three point lead in the first quarter, but they took a 19-17 lead heading into the second.

The second quarter was a fast-paced battle as Woodland refused to give up the lead while Valley refused to go down by more than six points.

A Cam Dooley three-pointer tied the game up at 30, but Woodland still took a 34-31 lead heading into halftime.

Valley woke up in the third quarter as the Rams opened with an 8-0 run to retake the lead thanks to a basket by Martin.

From then on, it was an offensive explosion for the Rams, who scored 28 points in the third quarter alone.

Momentum swung completely in Valley’s favor after a Brandon Thomas dunk gave the Rams a 48-38 lead, and the Wolfpack called a timeout.

Valley took a 59-42 lead heading into the fourth quarter, and it was all Rams from there.

Harper gave his team the inspiration they needed at halftime to come back in the game.

Harper knows that his team is facing pressure to stay undefeated.

“They’re under a lot of pressure,” Harper said.

“I don’t know if we’re going to be perfect, but we’re going to keep playing every game. Some of this won’t even matter in the area tournament. We could be 1-29 or 29-1. It doesn’t matter. We just have to keep on playing.”

The Rams won despite having to play Loachapoka the night before, but Harper knows how tough his guys are.

“I forgot we played a game last night,” Harper said.

“We were a little tired, but they pushed through it. We have to go again tomorrow.”

The Rams won’t have a lot of time to rest as they will play Carver-Columbus on Friday night.

“We’re going to need some people off the bench tomorrow,” Harper said.

“That’s a good thing. We have people who can play off the bench, so we’ll need them to contribute tomorrow.”

Harper knows that his guys will face an even tougher challenge on Friday.

“This is our third game in a row. No matter how well we play, we’re going to have to fight through adversity. It’ll be a tough one.”

Harper was pleased with his whole team in the comeback win.

“I was impressed by Cam [Dooley]. Brandon [Thomas] stepped in,” Harper said.

“Ian [Crim-Davis], Jameson [Harper], Lil-man [Jamarious Martin], and Denali [Dooley] all impressed me. Some came off the bench who impressed me.”

Harper knows that his team can keep their success going.

“We have to stay humble,” Harper said.

“You work hard every day. You strive to be perfect. We’re just living in the moment. We’re going to work hard and give it our best shot. At the end of the day, you just have to try and get a win.”