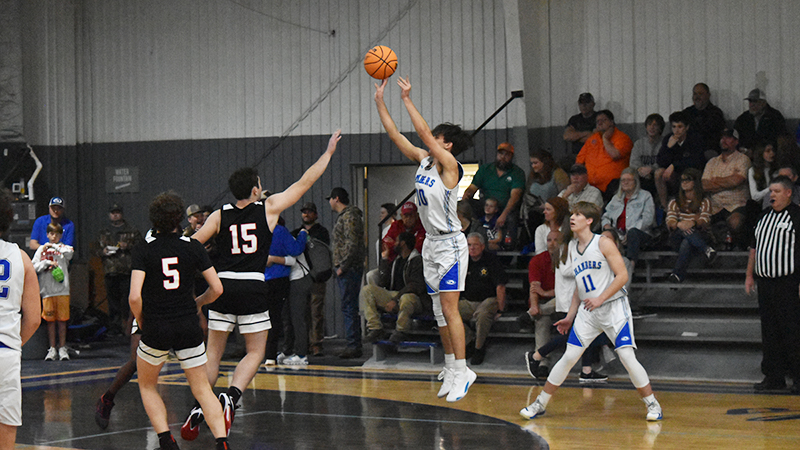 The Chambers Academy boys basketball team is entering Christmas break, but there’s a lot of work to be done before the team enters area play.

The Rebels haven’t played the easiest schedule, and they’re currently sitting at 3-5 on the season.

The Rebels have leaned on Caden Hayley, but they’ll need more players to step up if they’re going to win the area.

“We’ve had some ups and downs,” Allen said.

“We’ve had some big wins. We’ve had some tough losses. I don’t get too high or too low this time of year with basketball. We treat it like it’s preparation for January when we enter area play. We played some really good teams. We learned a lot about ourselves. We still have a lot to learn. We’ve gathered a lot of information, so we’ll evaluate over Christmas break. We’ll see where we are and where we need to make some changes. That’s where we’re at right now.”

Allen feels like his team needs to work on a lot before their next game.

“We have to find a way to get more players involved offensively,” Allen said.

“Caden Hayley is the guy that when everybody comes in the gym, they’re hanging all over him. We have to have other guys step up. We need to evaluate where we are defensively. We’re a man-to-man program, but there may be some little changes. We spent the better part of a month installing everything.”

Allen does feel like playing a difficult early schedule will prepare his team for area play.

“It really helps as long as you don’t get too demoralized,” Allen said.

“We try not to get too high or too low. If you play good people, it’s going to make you better. It doesn’t matter what sport you’re playing. I’m excited about the schedule we have coming up. We have a little border wars at Glenwood next week, and it’ll prepare us for January when things really start heating up.”

The Rebels have two games before they start area play, and Allen knows that those games will tell a lot about where they stand.

“We need to make sure that we work on holding the ball and not turning it over,” Allen said.

“In the games we’ve lost, we’ve turned it over. We haven’t gotten shots up. We have to make sure we keep people in front of us and not give up any easy shots or layups.”

As for Christmas break, Allen wants his players to focus on family more than basketball.

“I want to make sure they enjoy their families,” Allen said.

“I want to make sure they’re not just physically there but emotionally there. I want them to connect with their family and not their devices.”

The Rebels will also be happy to get some rest over the break.

“We need a break,” Allen said.

“The guys are tired of me, and I’m tired of them. I’ve been with most of them since June. When the football coach is the basketball coach, it becomes a long stretch without a break.”

As for the season so far, Allen is most pleased with his team’s close win over Springwood.

“It was a very emotional win,” Allen said.

“Our guys played on the line. It was two good teams, and they were our rival. That was our best win this year. Our worst loss this year was against Glenwood. We just ran out of gas. We didn’t compete the way we needed to.”

The Rebels will play their next match against Quitman in the Glenwood Border Wars, and Allen has never coached against them before.

“I don’t know anything about them. We’ve never played them in anything,” Allen said.

“They’re from Georgia. It’s not going to be very tough at all, but we’ll scout them. There’s only so much you can do. We’ll treat this like a practice game. The game is really inconsequential whether we win or lose. It’s more about if we’re getting better.”

Allen knows that  his boys need some more work before they enter area play.

“We still have a little ways to go,” Allen said.

“We still have some games in January as well. We just have to get some things figured out.”