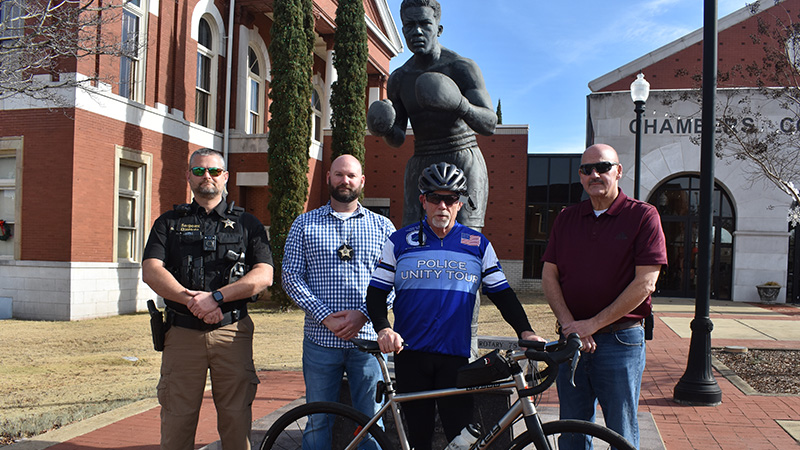 LaFAYETTE —Two days before calendar year 2023 begins, Reserve Deputy Sheriff Ken Hickman completed a 600-mile journey by bicycle across the state of Alabama. He ended it at the Chambers County Courthouse in LaFayette Friday morning. He met with county law enforcement officers, and at the statue of boxing great Joe Louis Barrow read a tribute to fallen deputy J’Mar Abel and led them in a moment of silence.

Once an officer does this ride in a given state,  they can take part in the National Police Unity Tour this spring. This will be taking place the week of May 8-14, 2023. These bicyclists will participate in a massive bike ride across the state of Virginia, ending the ride at Robert F. Kennedy Stadium in Washington, D.C. At the nearby National Law Enforcement Monument, the names of each officer who lost their lives in 2022 will be read aloud in a very moving ceremony.

“It has been a really interesting and inspiring ride,” Hickman said. “At each stop, I’ve talked to officers from each department about the individual they lost and what they meant to the community. This is the second year I have done this, and I’d like to keep doing it as long as I can. Every time an officer dies in the line of duty there’s a lot of publicity and attention to what happened, but it dies down as time goes by. Each officer made a noble sacrifice and should not be forgotten. Their families and close friends will never forget them, but all of us should remember them for how they had served their community.”

Hickman loves riding a bike and does it almost every day. He’s the coach of a mountain bike team at Jacksonville High School and frequently rides on the Ladiga Bike Trail, which runs from Anniston to the Georgia state line, where it becomes the Silver Comet Trail and continues to the metro Atlanta area. Hickman has ridden the trail from Anniston to Atlanta and back in a single day.

Such rides keep him in good shape for lengthy treks like this year’s Alabama Police Unity Tour.

“It has been an amazing experience,” he said. “God blessed us with some beautiful weather for most of our trip. Meeting people all over this state who have dealt with loss has really touched my heart and has made me more determined to keep doing this.”

Hickman is accompanied on the trip by long-time friend Lisa Gowens. When he’s riding his bike on busy roads, she follows close behind at slow speed in a truck. On Friday morning as he was riding down US 280 near Jackson’s Gap, Gowens was rear-ended by an approaching vehicle. Fortunately, neither was injured, but the driver of the other vehicle was treated on the scene by emergency personnel and taken to a local hospital.

“The purpose of the Unity Tour is to honor and raise awareness for law enforcement officers who have died in the line of duty,” Hickman said. “I express my sincere condolences to the citizens of Chambers County for the loss they have experienced with the death of Deputy Abel. I express my most heartfelt regrets to his family for the loss of this young man who had so much life ahead of him.”

Deputy Abel was only 24 years old when he lost his life in a police chase in northern Chambers County. He was assisting the Roanoke Police Department in pursuing a suspect along County Road 278 toward LaGrange. He lost control of his patrol car just past the intersection at Hickory Flat. He was the first sheriff’s office deputy for Chambers County to die in the line of duty.