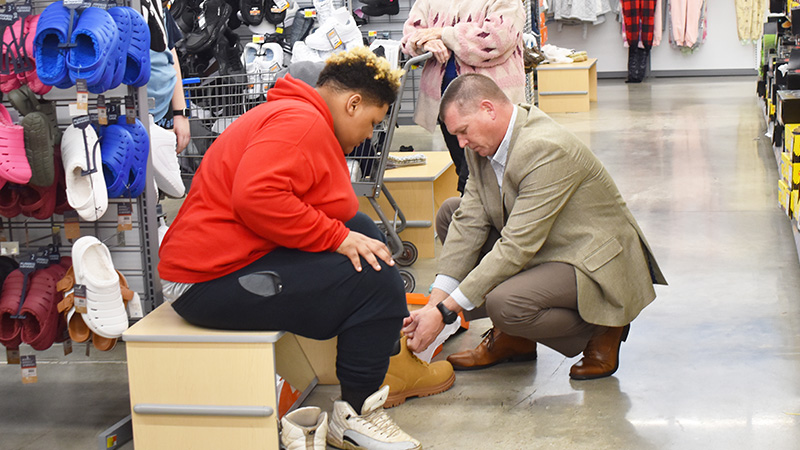 The Chambers County Sheriff-Elect Jeff Nelson spent Tuesday night Christmas shopping with two local students as a part of the Shop with a Cop event.

Lieutenant Sandra Crim, Major TJ Wood and Nelson split up with the kids to walk around Walmart and pick out Christmas presents together. ACA Gives donates $300 to each kid to spend, which is funded by A Call Away Bail Bonding.

“It’s what we’re elected to do, it’s what our jobs are — protect and serve. This is the service part. This is where you’re out here, and you’re taking care of the citizens of the county,” Nelson said.

ACA Gives Organizer Elizabeth Thompson said that Crim, who worked with school resource officers to choose the kids, was instrumental in organizing the event. Crim emphasized the importance of community engagement to build positive relationships between the sheriff’s office and the public.

“It’s all about us building relationships with the entire community, not just one sector of it,” Crim said.

Every year, Sheriff Sid Lockhart participates in programs such as the Toys for Kids, but Nelson said he stepped in while Lockhart was home sick with the flu. Nelson said he is dedicated to continuing the tradition of community engagement that Lockhart started.

“That’s the key thing is just building these relationships and continuing the things that Sid has done in this community,” Nelson said.

The ALEA partners with ACA Gives, which is a nonprofit organization focused on giving founded by A Call Away Bail Bonding Owner Barry Johnson. The program is originally from Randolph County, but now they service communities across the state.

“We’re trying to build that trust back between the law enforcement agencies and the public,” Thompson said.

Each year, the program works with law enforcement agencies to provide toys for kids during the holiday season. Last year, ACA Gives serviced 175 children across the state, not including the funding for the Shop with a Cop events.

“Everybody needs to do their part for the community. You can’t complain about your community if you’re not willing to do something to change it,” Johnson said.

Shop with a Cop is a program where law enforcement assists children in shopping for Christmas presents. Johnson started the program around six years ago after years of working in bail bonds. Seeing children that had to go without during the holidays inspired him to begin giving back to the community.

“It’s turned out really well. Like I said, they enjoy it and it’s worth it to see the kids when you see the look on their faces when they get to go, and they get what they want for Christmas,” Johnson said.