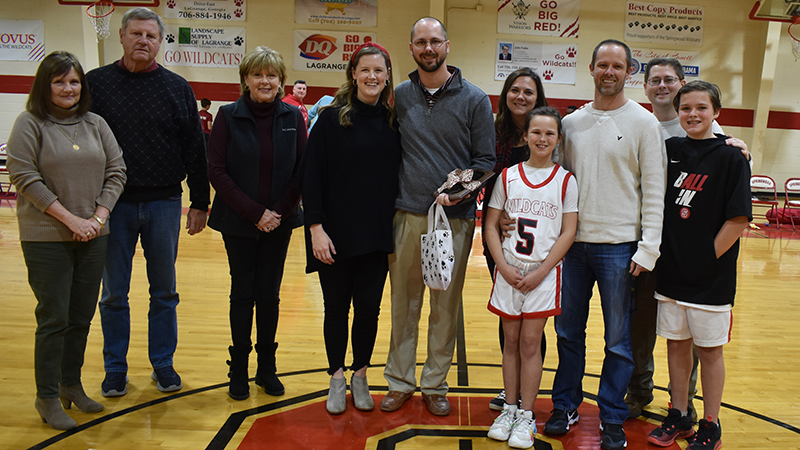 Carson Hill is the newest member of the Springwood School Athletic Hall of Fame. He was recognized at halftime of Friday’s girls basketball game in the Larry Boswell Gym.

Carson is the son of Joe and Karen Hill and husband of Sarah Olney Carson. A Class of 2007 graduate, Carson was inducted for all-around excellence in football, basketball, baseball, golf and track.

After quickly becoming the team’s starting running back his freshman year at Springwood, Carson racked up 42 consecutive games as a starter. He represented Springwood on the AISA All Star team in 2006 and was the recipient of the Pepsi Cola All-Star Football Scholarship Award. He was the team’s captain for the 2006 season and was the Wildcats’ most outstanding offensive player in 2003, 2004 and 2006. Carson earned the Best Back award, Best Skilled Player award, the Wildcat award, and the Kenny Merritt Attitude award.

“Carson was a great teammate,” said follow classmate and teammate Chase Dewberry. “He was talented, easygoing and dependable, intelligent and competitive. He pushed himself and his teammates to high standards in both sports and in the classroom.”

Carson finished his Springwood career with 3,183 yards rushing on 533 carries, and he scored 38 touchdowns. Those statistics rank third all time in Springwood history. He also caught 41 passes for 401 yards; on defense he had four interceptions and five fumble recoveries.

Former Springwood Coach Tad Niblett was well pleased with the selection. “Well deserved!” he said. “I always appreciated Carson’s work ethic and his coachable demeanor. He was always where he was supposed to be and doing what he was supposed to be doing. He always possessed a winning attitude and was willing to do whatever was asked to do to help his team. He was a great ambassador not only for Springwood athletics but the Springwood community as a whole. Congratulations, Carson, on this well-deserved honor.”

Carson excelled in basketball. He was chosen the team’s Most Outstanding Defensive Player his junior and senior years. He was the second leading scorer and top rebounder during his senior year. He was placed on the all-tournament team in the Autauga Academy Tip Off Tournament.

Former Athletic Director Mitchell Hamilton raves about Carson. “He’s a great young man,” he said. “We loved to call him Peanut. He was a leader on and off the field. He didn’t say a lot, preferring to speak with his actions. When he did speak, he controlled the room, the court or the field. He was a blessed young man when it came to athletics.”

Hamilton commended Carson for allowing his faith to form a strong foundation in his life and said that he admired him for being so strongly supportive of his family. “Carson was most definitely one of those athletes I considered a treasure to coach and teach,” Hamilton said.

Adding to his list of achievements, Carson was named valedictorian for the Class of 2007. “Carson was an amazing teammate, student and friend,” said former classmate and teammate Bill Parr. “When he wasn’t blazing by defenders on the football field, draining shots on the basketball court or blasting baseballs and golf balls in the spring he was acing every test and helping others academically, myself included. He is the type of person you could always depend on in any situation. He would always put others before himself. I can’t think of anyone more deserving of this honor than Carson Hill.”

Carson received the Springwood Scholar Athlete of the Year award in 2006 and 2007 on having been the student-athlete who maintained the highest grade point average while excelling in at least two sports.

Carson went on to attend the University of Georgia, where he earned a B.A. in accounting. In 2012, he received a Masters in Accountancy from UGA. Two years later he earned the designation of CPA. He is now the controller for J.H. Barrett Properties, Inc. in Atlanta.  He and wife Sarah are expecting a baby in February.