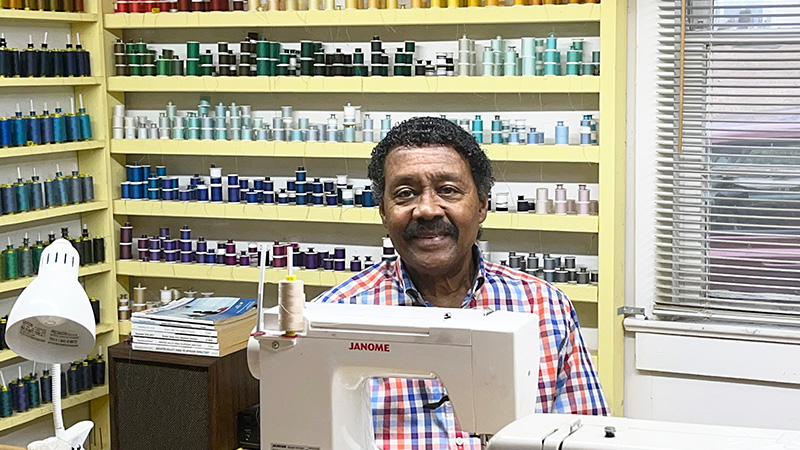 After 60 years of serving the community, Lawrence “Larry” Greenwood has decided to retire from his alterations business, Thimble 2.

“All good things come to an end,” Greenwood said. “It’s a bittersweet thing because we know it’s time to quit, but I’m going to miss my customers and talking to them every day.”

The Lanett native has been doing alterations for the past 40 years. For the past 11 years, the most recent location of Thimble 2 sits next to the Goodsell Methodist Church, a family tie for Greenwood and his brother, Leon “Jerry” Greenwood.

Their mother once lived in the parsonage, which now houses his alterations business. She was married in the front room, and she won a skating contest in the basement of the church next door. His grandmother, Hattie Ziegler, sewed garments for the public out of the same room in which he now operates.

“It started right here with my mother’s mother,” Greenwood said.

“That sewing machine was sitting there staring at us like it was saying, ‘come play with me,’” Greenwood said.

The twins practiced sewing on that very machine. They began sewing garments for friends and neighbors when they were still in high school. The brothers sewed a new dress for one neighbor every Sunday for church.

“We got a lot of experience before we even got training,” Greenwood said.

While studying at Tuskegee Institute, the brothers often stayed up all night sewing garments for their friends and neighbors. The brothers even made the uniforms for the Commodores during this period.

“We practiced our skills on the Commodores who were in school the same time we were. We made suits for them, and they always loved white for some reason. We made a lot of white suits,” Greenwood said. “They asked us one year to go with them to Europe and we said, ‘heck, no, my dad would kill me if we got caught.’”

“It took us about all summer long,” Greenwood said.

The impact that the brothers left on the community still echoes to this day. Even now people come up and tell him about the different garments he made for them all those years ago.

“We stay busy all the time, and right now, I really hate to leave because so many people need this work done,” Greenwood said.

Over the years, technology has touched the world of needle and thread. Over the past 60 years, every day that he has worked, Greenwood has learned something new about sewing. Though it may be a dwindling art, he maintained that the complexities of sewing, particularly women’s garments, are ongoing.

Greenwood has now decided to join Jerry in retirement, though it was bittersweet to say goodbye to his customers and friends. Greenwood is grateful for the partnership with his church over the past 11 years and the loyalty and conversation of the past 60 years.

“I’ve met more people than I ever would have and talked to them and got to know them,” Greenwood said. “But when it’s time to go, you know it’s time to go.”

Longevity in life runs in Greenwood’s family — with his mother and father living to the age of 93 — but at last, he decided that it was time to put down the needle and thread.

However, that doesn’t mean that the sewing machine has stopped calling to him. Greenwood said that he may finally find time to sew for himself after serving the community for over six decades. His sewing machine is going home with him.

Greenwood said his customers will likely be turned over to Ms. Mary Phine’s, located across the street from Kroger, which Greenwood and his brother have worked with over the years.