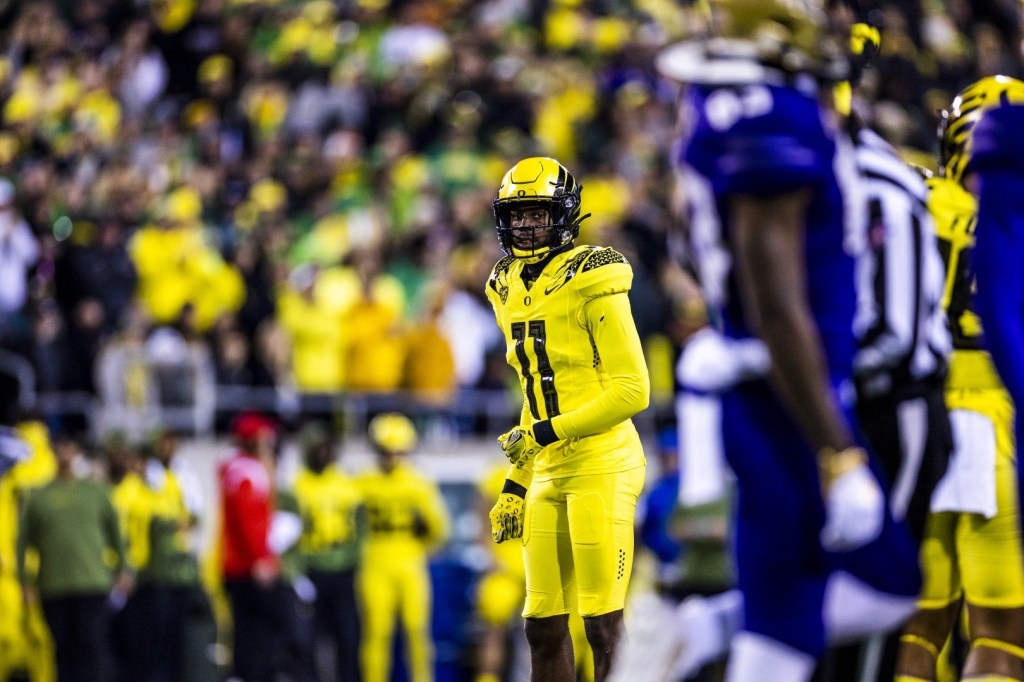 Former Lanett High star Trikweze Bridges wrapped up his first season as a starting cornerback for the Oregon Ducks, and he capped it off with three interceptions, a forced fumble and 47 tackles.

Bridges was a defensive back and receiver for the Panthers before he chose Oregon over schools like Alabama and Florida as a three star recruit.

Bridges has seen the field in all four of his seasons at Oregon, but 2022 was his first year as a full time starter.

Bridges was able to use a COVID year to stay a sophomore in his fourth year.

“A lot things have gone well for us. I’ve been able to be physical and help my team in different ways. I’ve grown a lot this season at corner.”

Bridges played in the Holiday Bowl against North Carolina on Wednesday, and he was prepared for the challenge.

“I watched film and worked on the tools I need to bring to the game,” Bridges said.

“They have a lot of guys that are good at catching the ball on the outside. I just focused on that and what I can use against them. I’m looking forward to the game.”

Bridges had to prepare for a freshman star in North Carolina quarterback Drake Maye.

“He has a strong arm. He likes throwing the ball quick. He can scramble under pressure. He can move around in the pocket. We have to take away the quick throws and keep him in the pocket.”

Bridges learned a lot in his first year as a starter.

“The game can be fast or slow,” Bridges said.

“It depends on your preparation. You have to gameplan against different teams. You’ll see where teams might try to catch you with things that hurt you last game.”

Bridges also recounted the blowout loss to Georgia to start the season.

“We went home and watched film the next day,” Bridges said.

“We just focused on the things we needed to correct. The biggest thing was missing tackles. Our tackling has been way better throughout the season, and it’s caused us to win a lot of games. Those are things that can hurt you at the beginning of the season and the end.”

Bridges will have a chance to improve as he will have another two years as a starter in college.

“I learned more about my confidence,” Bridges said.

“I can take what I’ve done this season and carry it over into next season. I can continue to grow and build off of that.”

Bridges has enjoyed playing on college football’s biggest stage after coming from Lanett.

“Being here [Lanett] and just seeing how small the school is, it’s amazing,” Bridges said.

“I just know where I came from and where I am now. I see a lot of kids here grow and get out of Lanett. They put on for our city and do it themselves.”

Bridges still has goals for next season.

“One of my goals is to grow bigger and become more vocal as a leader on defense,” Bridges said.

“I’m one of the guys that the younger guys listen to, so I want to focus on helping them and myself. They help me grow as well.”

Bridges had a message for the Lanett players who are trying to work their way to the next level.

“There are a lot of things outside of Lanett,” Bridges said.

“We think that there’s only Chambers County. There are things that can help us realize our dreams. A lot of us have dreams we don’t chase. You’re always going to have that speed bump to go over, but once you get through it, you’ll have a lot of energy.”

Bridges capped off his sophomore season with a big win over the Tar Heels.

Bridges had two pass breakups, including one against Drake Maye’s final effort pass in Oregon’s 28-27 win over the Tar Heels.