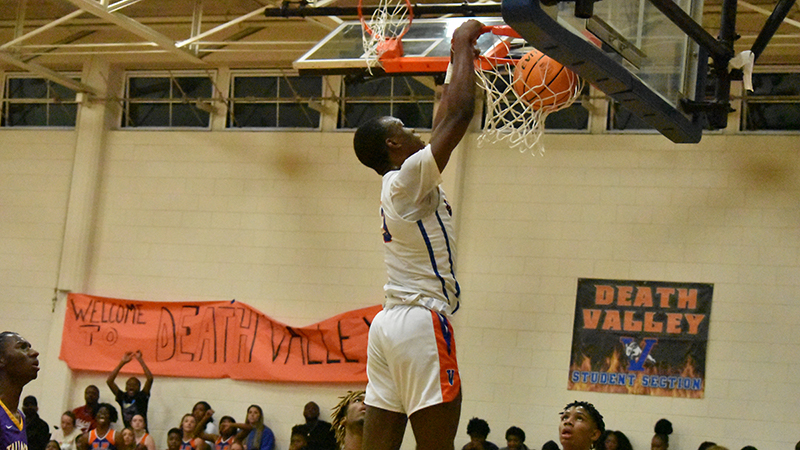 The Valley Rams continued their hot streak with a massive 72-50 win over Tallassee on Monday to earn their first area victory.

“I was very impressed,” Harper said.

“They came out and played defense. They played team ball. They executed a lot of things, and they got a win. It doesn’t matter if we won by one or 20.We’re 1-0 [in area play].”

The Rams are now 8-0 on the season, and Harper knows they can’t take their foot off the gas.

“Rankings don’t mean anything. You can get beat. Everybody’s gunning for us, so we just have to play hard and stay humble.”

The first half was a continuation of that the Rams have done all season.

Valley’s defense was fast and created traps that forced the Tigers to turn the ball over.

Cam Dooley and Brandon Thomas had three combined dunks to get the crowd into the game while Dooley had two first half blocks.

The Rams got off to a quick 12-5 lead in the first quarter, and they never looked back.

The Rams ended the first quarter with a Cam Dooley block followed by a Jayden Thomas basket to make it 22-12 heading into the second quarter.

The Rams opened up the second quarter with a 9-0 run despite missing a few free throws, and they continued to dominate the boards and take a 35-17 lead heading into halftime.

Brandon Thomas led the Rams in first half scoring with 13 points.

The second half was more of the same for the Rams, except they were able to put their backups in for the majority of the half.

The Valley bench was able to make an impact as the Rams still scored 29 in the fourth quarter to close the game out.

Harper knows that it took his whole team to win the game.

“We don’t need anybody scoring 50 when we have people scoring 15 or 20 or 10. It’s been very good. We’re trying to host the tournament for our area. We have to take it one day at a time. We have to work hard and come prepared every day.”

Cam Dooley was the leading scorer for the Rams with 21 points.

Twelve of those came in the second half.

Jamarious Martin was the second leading scorer for the Rams with 19 points.

The Rams will face Loachapoka on Tuesday before they prepare for the Auburn tournament over the weekend.