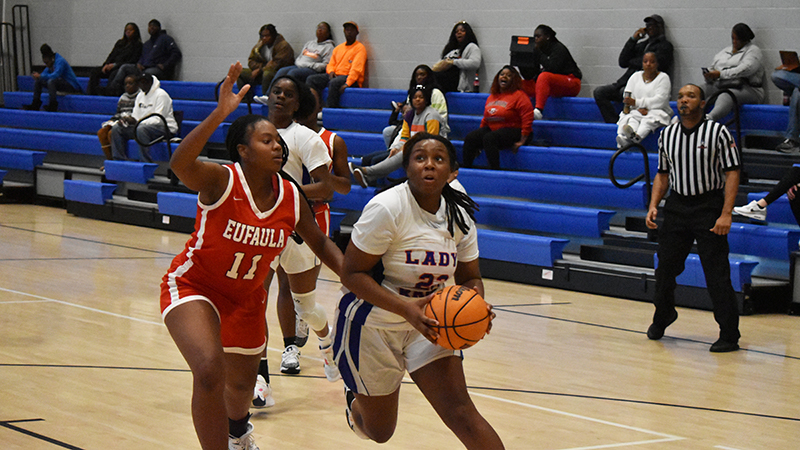 The Valley Rams faced a tall task against undefeated Eufala and couldn’t overcome the defensive pressure the Lady Tigers imposed in a 63-25 loss at Auburn on Friday.

Eufala made their presence known early as the Lady Tigers took a quick 9-0 lead in the first quarter.

The Lady Rams were missing center Jaylah Sturdivant, who is recovering from surgery.

Valley head coach George Grimes knew that Eufala would be a difficult opponent.

“It could’ve been a lot better,” Grimes said.

“We made a lot of turnovers. We gave up too many second chance opportunities.”

The Lady Tigers took an 18-4 lead heading into the second quarter, and the Lady Rams only scored one field goal in the first period.

Eufala took a 29-8 lead heading into halftime, and the Lady Rams couldn’t overcome the deficit.

The Lady Rams started overcoming their offensive struggles a little more in the third quarter as Valley scored 12 points thanks to five points from Aniyah Robinson.

Grimes knows his girls need to keep their heads up, especially since it’s still early in the season.

“We just have to practice,” Grimes said.

“I told them at the beginning of the season that November, December and January are more like practice months. We just need to be ready by February for when the area tournament comes around.”

Grimes knows his girls have a lot of work to do before February.

“We started talking a lot more in the second half on defense,” Grimes said.

“That’s something I’ve been harking on them to do. We’re struggling with rebounding without Jaylah. Her height alone takes away six or seven rebounds. They worked tonight, but Eufala was the better team tonight.”