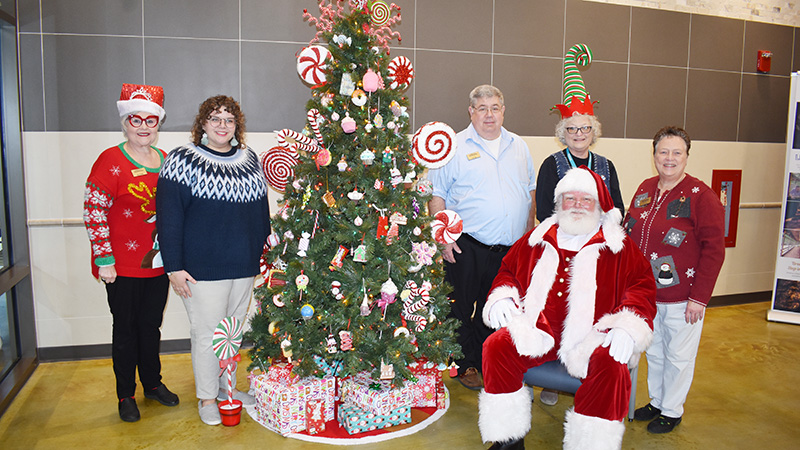 LANETT — More than 40 students from Valley Haven School visited the new Alabama Welcome Center on I-85 Thursday morning and were treated to a Christmas party by the Welcome Center staff. They enjoyed seeing the holiday decorations at the center including items on the big counter such as a pair of hugging reindeer, a gingerbread village and some English carolers from the Ebenezer Scrooge era. The students also had a chance to pose for pictures with Santa Claus, who was seated next to the Sweet Home Alabama Christmas tree.

To Santa’s dismay, those who tugged on his long white beard found that it was real and not fake.

Valley Mayor Leonard Riley came by to take part in the holiday merriment.

Everyone was treated to snacks and some cold lemonade, and Tonya Frank was there to lead some Christmas caroling.

The students joined in the singing of traditional carols such as “Silent Night,” “Joy to the World,” and “Deck the Halls,” before they turned to more recent holiday songs.

“I bet you will know these songs from riding the Merry Go Round,” Frank said in leading to more contemporary Christmas melodies such as “Rockin’ Around the Christmas Tree,” “Rudolph the Red-Nosed Reindeer,” “Jingle Bells,” “Jingle Bell Rock,” “Have Yourself a Merry Little Christmas” and “We Wish You a Merry Christmas.”

Frank closed with a solo of “O Holy Night,” a song she always sings on Christmas Eve at the First Methodist Church of West Point.

“She does that song like no one else,” Smith said. “Every time I hear her sing it I get chill bumps.”

The students were driven to the Welcome Center on two of the Valley Haven buses. They were accompanied by staff members April Preston, June Rogers, Abena Graham, Valerie Sherman, Shelby Flakes, J.T. Barker and Heather Coker.

While a fun Christmas party was taking place inside the new welcome center, a work crew was busy on the opposite side of the Interstate. They were working on getting some new lighting installed. The project could be completed in the new future. When that happens, the part of I-85 that enters Alabama from Georgia will be one of the best lighted sections of Interstate in Alabama. This new lighting will be in contrast to what’s been there for a long time. Exit 79 had been neglected for a long time before the current lighting project was approved. Most of the metal poles that were put along the Interstate when it first opened in 1964 were never replaced. Many of them rusted through, collapsed to the ground and were left there until the current project began. Most of the funding comes from the federal government and the state.