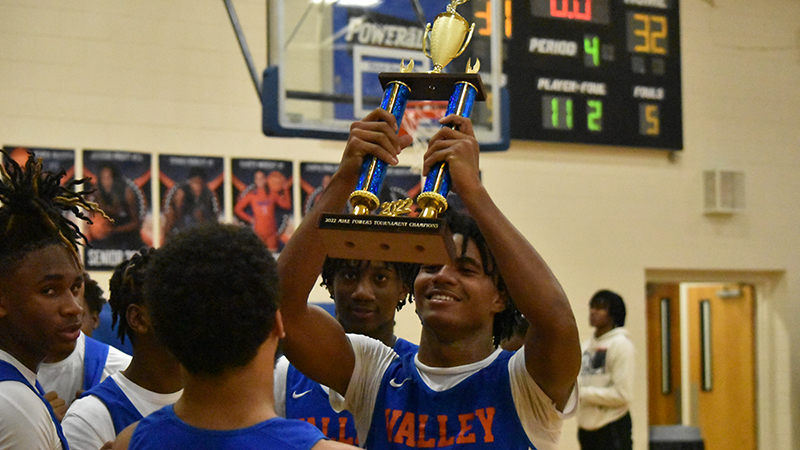 The Valley junior varsity team continued its almost perfect season with a massive 32-31 victory over Callaway on Tuesday to win the Mike Powers Holiday Challenge.

The Rams dominated the LaFayette Bulldogs 66-47 in the semifinals of the tournament, and they were able to get an hour and a half of rest before they had to face the Cavaliers in the championship.

Despite neither team being full of energy, Valley was able to pull away in the final minute to overcome a deficit they faced almost the entire game.

Valley head coach Ryan Winston is proud of how his guys fought back after being down in the first three quarters.

“I’ve been preaching to the guys to keep being disciplined and hustle,” Winston said.

“We tried to minimize turnovers in the second half. I’m proud of them.”

The Rams ended the first quarter down 10-7.

Callaway’s largest lead of the game came in the third quarter when the Cavaliers were up 26-19, and Callaway went into the fourth quarter up 30-24.

The Rams came out firing in the fourth quarter thanks to two three pointers by Zan Woody to tie the game up at 30.

Callaway retook the lead with a free throw, but Woody was able to hit two of his own to give Valley a 32-31 lead with only 38 seconds left.

The Cavaliers turned the ball over on two final inbound passes, and Valley hung on to win the tournament.

Winston was proud of Woody’s performance.

“He’s been that go to guy for us all season on defense,” Winston said.

“He can steal. He can score. He’s an energy guy. Shout out to Callaway for competing.”

The Rams are now 12-1 on the season, and they’ll face Loachapoka on the road on Wednesday.