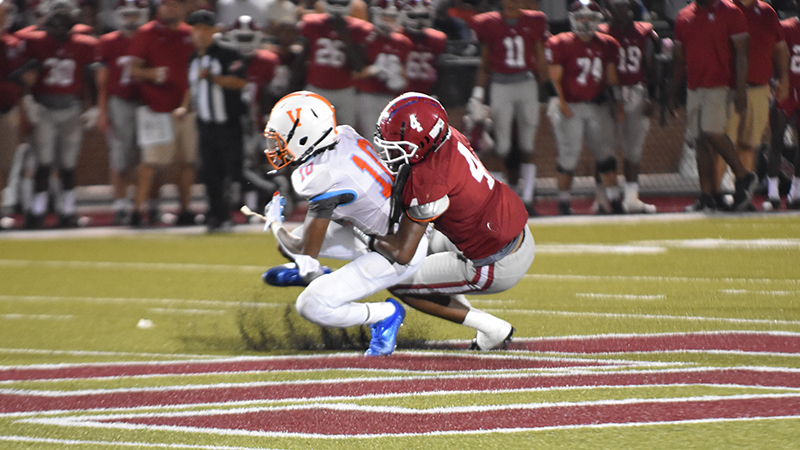 The Valley Rams had an arsenal of receivers in the 2022 season, and Cameron McLemore is the latest Ram to be noticed by colleges as he has received five offers so far.

McLemore is a senior who played both wide receiver and safety while at Valley.

McLemore explained how he’s been working on his game since football season ended.

“We had pros and cons during football season,” McLemore said.

“I did my best to be good on the field and as a student athlete. After football season, me and my coach, Desmond Reese, would work out early in the mornings and put the work in. I would really like to thank him and my other coaches for everything.”

McLemore reflected on his senior season as well.

“During the first game, I felt like we had a shot,” McLemore said.

“As the season went on, we have a lot of players with potential. It’s a shock because it’s my last time playing with Valley High, so I would like to thank everybody that believed in me including my mom, my dad and the man above.”

McLemore is sad that his playing career at Valley is over, but he’s looking forward to new opportunities.

“It hit me in my last game,” McLemore said.

McLemore faced challenges while being part of a stacked receiving corps on a run-heavy team.

“You have to rely on and trust your quarterback. It’s up to you.”

McLemore won’t make a decision soon on where he wants to go as he’s still waiting for more offers.

He also feels like he has a lot to offer as a receiver.

“I bring the strength and everything a receiver needs,” McLemore said.

“Everything coaches ask for, I’ll be able to give it.”

McLemore will also run track for Valley, but he’s using the winter to work on his skills as a receiver.

“Right now, me and Coach Reese have been working out,” McLemore said.

“He’s been teaching me a lot of new things, and I just thank him. Without him as a coach, I don’t think I’d be where I want to be.”

McLemore remembers his favorite moment while playing for the Rams.

“My favorite memory was in the Handley game when Cam [Dooley] rolled back, and I caught it,” McLemore said.

“Sad to say, I didn’t get  away, but it was my first catch of the year. We had a team bonding experience, and it really brought us together. I really want to thank the whole team and the coaches.”

McLemore wants to play football at the next level, but he has other aspirations as well.

“My long term goal is to be successful in life,” McLemore said.

“I want to go to school and major in interior design or real estate. As far as football, it taught me how to become a man and be the guy I am today.”

McLemore feels like he’s grown as a receiver while at Valley.

“I’ve grown so much,” McLemore.

“I’ve had my coaches and teammates by my side. When I was down, they picked me right back up. The team is like family.”

McLemore feels like he has the drive that has helped him develop.

“You have to keep going. You never know when your time is going to come. I’m just blessed to have the offers I have.”