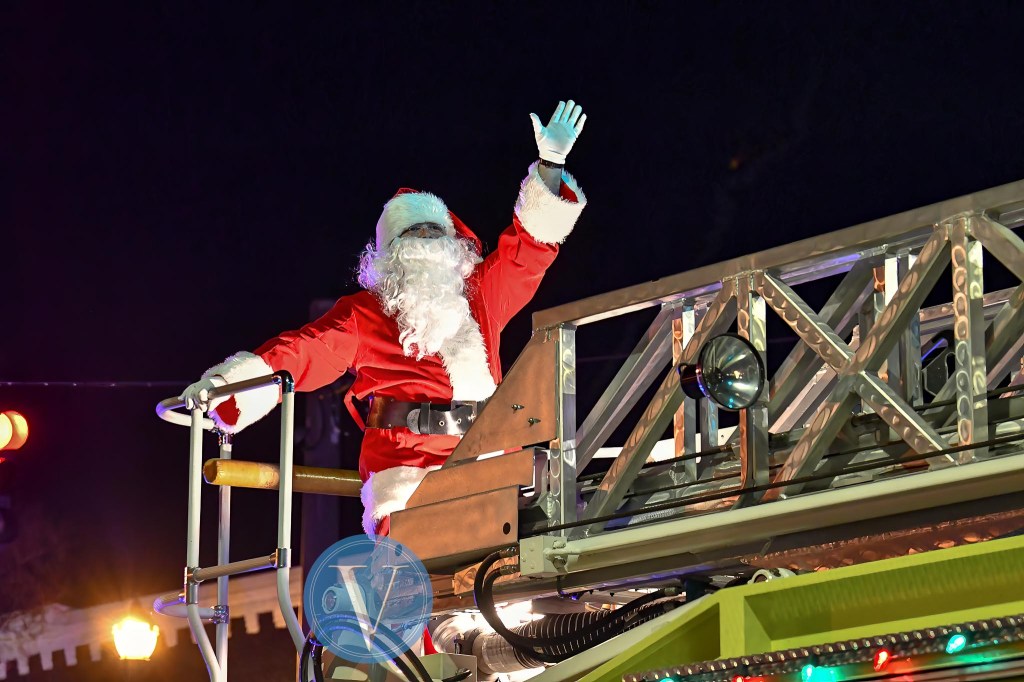 VALLEY — Things didn’t look good for the Valleywide Christmas Parade early last week. It looked like it was going to be a small one this year. Only around 30 local schools, community organizations, businesses and churches had signed up to be in it.

“When we were lining up for the parade, we filled up the entire area next to the Cherry Valley Shopping Center and had to line up some floats on Cherry Drive and on the street behind the shopping center (North 12th Street). We had never had to do that before,” said Laurie Blount of the parade committee. “From start to finish, the parade stretched out for more than a mile.”

“The parade was great,” Greater Valley Area Chamber of Commerce Executive Director Carrie Wood told The Valley Times-News. “A lot of times people wait to the last minute to commit because they want to see the weather forecast and whether or not there’s some sickness going around.”

Thursday evening’s weather couldn’t have been better for an evening in December, and the worst of Covid (hopefully) has passed.

Factors in choosing the winning floats were creativity and capturing the spirit of the Christmas season.

Located in Newnan, Georgia, Warren Professional Services provides bookkeeping services, business credit, business structure, individual and business tax services, notary services and payroll services. Their winning float featured a banner with a large photograph of owner Sonia Warren. Lots of happy children wearing red and white Santa caps were on the float. They smiled, waved and wished everyone a Merry Christmas while a snow-making machine generated snowflakes along the way.

The star of the Timeless Antiques float was “Sugar,” a a small fice type of dog Gayle Daughtrey recently rescued from the middle of a busy street in LaGrange.

“I was afraid it was going to get killed if someone didn’t get it off the road,” she said. “I went around the neighborhood where I found it, knocking on doors to see if someone knew whose dog it was. No one I talked to knew. We call her Sugar because she is very affectionate and likes to lick you. I hope I can find her owner. If not, we will find a good home for her.”

Sugar rode on a red wagon-style float with green wreaths and lots of greenery with colored lights.

Formerly known as Letica, the local Berry Global plant is located in the Huguley Industrial Park. The local plant is now part of a giant corporation. The Berry Global Group, Inc. is headquartered in Evansville, Indiana and has over 300 plants worldwide and employs close to 50,000 people. The company generates over $13 billion in annual revenue. Berry Global prides itself on making products that make life better for both people and the planet. Employees of the local plant were very creative in using some of the plastic they make in their float.

Swim coach Bobby Poer is very proud of his swimmers, both on having had a good swim season this year and of the enthusiasm they displayed in their first-place float. The float was emblazoned with shark logos (it’s their mascot) and their theme: “Just keep swimming!” Everyone was dressed in red and green and were wearing Santa-style caps.

Founded by Cameron Reed and located in Lanett, the Reed Foundation is committed to sharing joy and love through outreach.

“The fight is never too big or too small,” said the founder. “We are here to help.”

The float from the Holy Family Catholic Church depicted a live nativity. An angel was holding the Baby Jesus in her arms. This impressive float won the third-place award.

It took an all-out effort by Fairfax Elementary School to win the first-place award in the school competition. They had a “Polar Express” theme and filled up three floats with excited children. The floats were remindful of the passenger coaches on the animated movie, and one of the teachers wore a Tom Hanks-style conductor’s cap.

The students from Inspire Academy always knock themselves out in building a Christmas parade float. They did once again this year and it won them the second-place award.

“They built a transfer truck on their float,” said Carrie Wood. “I know it took a lot of time and effort to do that. I also liked Springwood’s float. Members of the football team and the cheerleaders rode on it.”

The float won the third-place award. In a switcharoo from their Friday games, it was the football players, not the fans, who were seated in the bleachers. They managed to have bleacher-style seating on their float.

The Wildcats had a very good year in football this year, making it all the way to the state championship game.