Year in Review Part II: Spring saw trash become a hot topic, plus a big concert at The Oaks 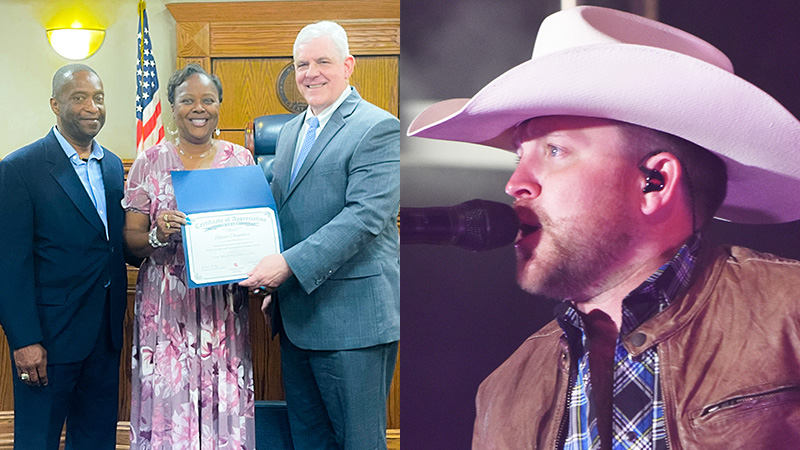 EDITOR’S NOTE: This is the second in a four-part series, remembering the year 2022. This section reflects on April-June 2022.

Moore performs at The Oaks Farm

In what became an ongoing issue in several municipalities, the Chambers County Commission first heard concerns about AmWaste at a meeting in April. The county said it was getting calls about missed pick ups and not receiving cans. The waste management provider discussed staffing issues it was facing, as well as other problems.

Attorney General Steve Marshall announced in a press release that Roland Sledge, the former Chambers County Deputy District Attorney, was sentenced to serve 12 months in county jail. Sledge had pled guilty on Feb. 25 to the theft of property first degree, a class B felony, for taking more than $300,000 from three conservatorships for which he was responsible.

Sip Café and Wine Room held its ribbon cutting in West Point, filling a need that owner Tiffany Welch and her husband saw in the area. Sip provides a place to eat dinner, sip wine and relax.

The Greater Valley Area Chamber of Commerce held a ribbon cutting for Gimme Some Coffee, a sister store to Gimme Some Sugar Boutique & Gifts. Both stores are located in LaFayette, near the Chambers County Courthouse.

Superintendent Casey Chambley announced at a school board meeting in April that the Chambers County School District had become a two-to-one school system, meaning each student would have a Chromebook they could take home and a Chromebook to use at school.

The West Point Police Department was investigating an armed robbery at Roger’s Bar-B-Que in West Point where three employees were held at gunpoint inside the restaurant. The suspect took cell phones and cash from the cash register.

Dr. Kim Baylis was named the new head of school at Springwood, taking over for Lowrie McCown.

On Election Day, voters chose Jeff Nelson as the candidate for sheriff in the Republican primary. Nelson went on to win the general election in November as well. Debbie Wood beat Micah Messer in the District 38 race.

The Chambers County Board of Education voted 4-2 Wednesday to pass a 2022-2023 code of conduct that included a new student uniform policy. Superintendent Casey Chambley said some problems in the school system, such as bullying, were tied to clothing.

LaFayette City Councilman Shannon Hunter announced he was resigning his seat on the city council. Hunter did not give a specific reason but noted frustration since getting involved in the city’s government in 2018.

Chambers County received only one bid for its waste management contract and that came from Amwaste, the county’s current provider. The bid was unanimous and with time being of the essence, the commission did not believe it would have time to re-bid. The new package with Amwaste did add penalties for service disruptions. The cost of the service increased as well.

Charles Looser resigned from the Lanett City Council, citing age and the likelihood he’d move closer to be near his son in Auburn. Looser is a longtime Lanett City School system educator.

Former Recreation Director Ronnie Tucker was named to succeed Charles Looser, who had resigned earlier in the month.

The city of Valley approved the purchase of 370 acres of land that border the Chattahoochee River. The land touches the 92-acre Shawmut airport side on the north end and extends southward along the river in the direction of EAMc-Lanier Hospital. The total purchase price was $1,350,500.