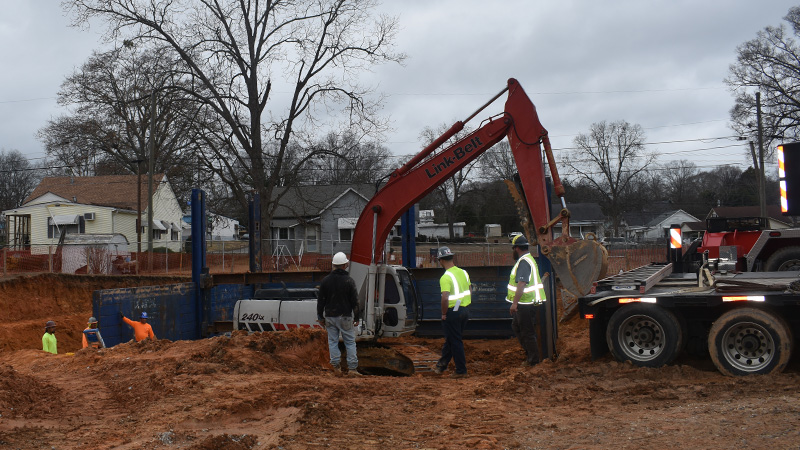 LANETT — Anyone driving up or down Highway 29 past the Kroger block lately has noticed a huge crane at the Chattahoochee Water Supply District’s water processing plant and may wonder what’s going on there.

Trackhoes have been on the site digging a deep hole in the ground, and the crane is involved in building a new high service pump station.

Two new clearwells will be going in the big hole and the pumping station will play the key role in keeping up with the local area’s demand for water. That’s been going up to some degree with the new John Soules Foods plant being in production in Valley. The company is already one of the area’s largest employers, and the present number will be going up when the two current production lines expand from two to five.

The water plant project should be completed in calendar year 2023, and the plant should more than adequately meet local needs when John Soules Foods goes into full production. To be fair, the new plant is not the sole reason there’s a need for more water capacity. The water plant provides water for the cities of Lanett and Valley along with the Huguley Water Authority and the Chambers County Industrial Park in Cusseta. The 2020 Census revealed growth in the area before John Soules Foods went into production.

What’s taking place is a $12 million project that’s being funded by a state revolving fund loan. P.F. Moon & Company, Inc. of West Point is the project contractor and Goodwyn, Mills & Cawood of Montgomery is the consulting engineer.

While the major portion of the project involves building the two new clearwells and installing the high service pumping station, some other improvements to the system will be taking place. According to ADEM, there will be some improvements to the existing plant’s filtration, electrical and the treatment processes along with some new instrumentation. The project began approximately one month ago and should be completed by December 2023.

According to ADEM Director Lance LeFleur, completion of the ongoing project will help maintain compliance, provide safe potable drinking water to all customers while improving the efficiency of the treatment system. These improvements, he said, will meet current and future demands of the local water system.

Tony Segrest, the general manager of the East Alabama Water, Sewer and Fire Protection District, told The Valley Times-News that the current project is the first phase of what needs to be done to increase local water capacity from seven million gallons a day to 12 million gallons a day.  New piping is needed for aa second phase. There are also needs for a new filtration system, new filters and a new raw water intake on the Chattahoochee River.

“This would take our treatment capacity to 12 million gallons a day,” he said.

Segrest said the new John Soules Foods plant hasn’t put that much of a strain on the current system.

That will be going up when all five lines are in production, but the current system should be able to handle it with the needed improvements.

“The design for doing what we need to do is about 50 to 60 percent complete,” Segrest said. “We are also getting ready to break ground for a new wastewater treatment plant.”