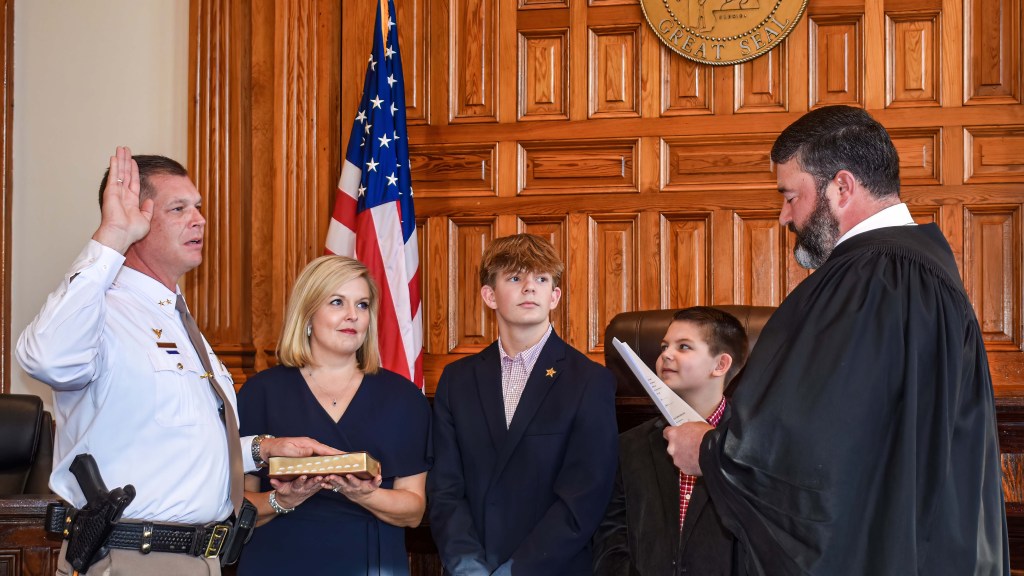 LaFAYETTE — A large crowd was present for Sunday afternoon’s swearing-in of a new sheriff in the big upstairs courtroom at the Chambers County Courthouse.

Jeff Nelson is the county’s first new sheriff since 1995 and only the second one since 1967. He’s the 36th sheriff in Chambers County history.

Nelson told the jam-packed courtroom that there would be some changes with the new administration but nothing major. His first official act was to see that 26 deputies would be retained. Each was given a new badge with Nelson’s name on it; Lockhart’s name had been on the badges they’d been wearing.

Mike Parrish is the new chief deputy with Tommy Sims and T.J. Wood the majors. 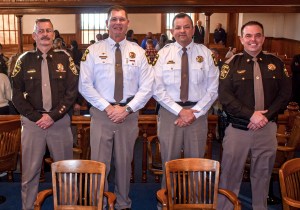 Nelson was sworn into office by Circuit Court Judge Isaac Whorton. The new sheriff’s wife, Kristin, held the Bible and sons Rush, 14, and Reid, 11, stood by his side.

“I want to thank all of you for being here today, and I want to thank everyone who supported me in my election,” Nelson told the big crowd. “I will do everything I can to serve this county with honesty, integrity and honor. I am here for the citizens of Chambers County.”

In retaining the present staff, Nelson commended the job done by Lockhart during his time in office.

“Sid hired every one of them,” he said. “I know they are good men and women.”

There were lots of uniformed law enforcement officers in the courtroom. The deputies and the sheriff’s office staff filled several long rows and behind them were some Alabama State Troopers who had served with Nelson and came to show their support of him.

“I appreciate all of you,” Nelson told the group of deputies. “It will be a privilege to work with you,” he said. “I wouldn’t be here today without officers like you. The people of this county would not have voted for me had it not been for the integrity of the men and women we have in uniform.”

Lee McWhorter, who recently retired from the Alabama State Patrol as a captain, spoke to the crowd about Nelson.

“I have known him for 25 years and love him like a brother,” he said. “We sometimes use words too lightly, but when Jeff Nelson tells you he will serve with honesty, integrity and honor you can believe it. Those words describe him. You deputies will have a man you will be proud to work under.”

Kevin Pigg said that he had worked with Nelson over the past year and had gotten to know him well.

“This is not a political adventure for him,” he said. “It’s a calling for his life. It’s easy to do nothing, but to do something to make a difference you have to be strong enough to overcome a fear of failure. I know that Jeff was sincere when he told me what mattered most to him is that he wanted what was best for Chambers County. I know it will be a hard task to follow someone like Sid Lockhart, but I know that Jeff Nelson will be a strong leader who will serve with honesty and integrity.”

Whorton had a word of advice for the new sheriff. He said that he had learned while campaigning for office, once for the state house and once for circuit judge, that there’s always a lot of noise out there.

“It’s important not to listen to it,” he said. “Just do your job the best way you know how to do it, and don’t be distracted by the noise.”

The swearing-in ceremony concluded with Lockhart pinning on a new badge for Nelson. They shook hands and Lockhart gave him the keys to the sheriff’s office.

“I know that Sheriff Morgan would have been proud of you,” he said. 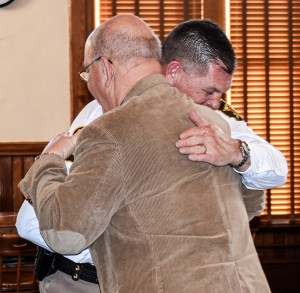 James C. Morgan was elected Chambers County sheriff in 1966, was sworn into office in 1967 and served until 1995. Lockhart was his chief deputy when Morgan decided not to seek re-election in 1994. Lockhart ran for the office in 1994, was elected carrying all but one precinct in the election and carried every box in the next six elections.

For a number of weeks heading into Nelson’s swearing in, Lockhart has been wearing a wristwatch that’s been counting down the days, hours and minutes to his retirement from the office. It went off at midnight CST Monday night.

“This is a dream I started a long time ago,” Nelson said immediately after the swearing-in. “People have heard me say over the years that I would love to be the sheriff of Chambers County one day. Please bear with us as we go through this transition. There won’t be any drastic changes. I will give the citizens of this county my best.”

Seeing the Chambers County commissioners seated as a group, Nelson said he would be at every upcoming commission meeting he could make it to.

“I appreciate the job you have been doing in taking care of the citizens of this county,” he said.

He vowed that his department will be responsive to the public.

“If you call the Chambers County Sheriff’s Office, we will come,” he said. “We will be there in your time of need. “