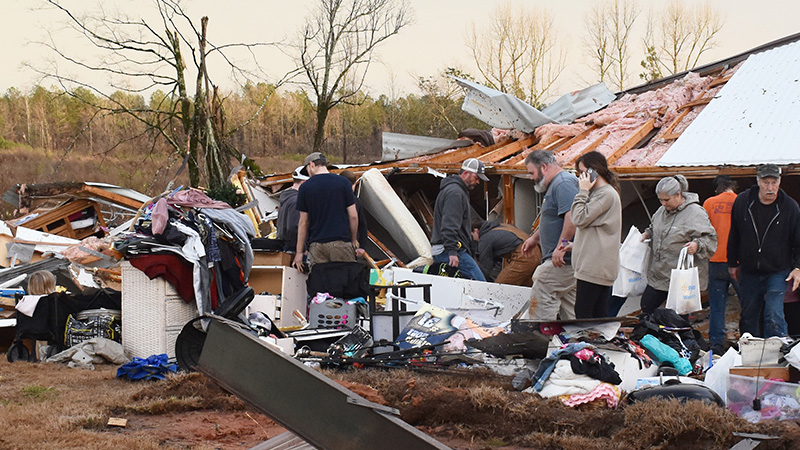 She and husband Jimmy Williamson were living in a modular home off County Road 278 a couple of miles east of the well-known rock the town gets its name from. Amber was at home alone when the tornado warnings went out for northern Chambers County.. “I knew it wasn’t safe to be in mobile home so I got in my car to drive to the home of my friends Scotty and Crystal Ruston, who live near the Randolph County line.”

She was heading west on CR 278 when the wind and rain from the storm was so bad she had to pull over on the side of the road near the bridge over the CSX Railroad tracks, not far from the downtown crossing.

“The rain was really coming down, and the wind was blowing limbs and debris on my truck,” she said. The sky was a funny color, kind of yellow and brown.”

It lasted only a few minutes, and it was over.

Amber went back to her home to check on the damage and that’s when the shock and heartbreak became almost unbearable. Their modular home had been completely lifted off its foundation and lay in ruins a short distance away. All their personal belongings were scattered all about

She and family members spent much of the remaining afternoon and all day Friday gathering what was salvageable.

“I found a lot of pictures that mean a lot to all of us, and we were able to find some clothes that can be washed,” she said.

Her husband Jimmy was away at work when the tornado hit. He works at WestRock in the Huguley Industrial Park.

Other family members who had been living there include 21-year-old Joylin Pike, 20-year-old Tristen Pike, 19 year-old Trey Elliott and the couple’s 20-month-old granddaughter Presley Pike.

With the loss of their home, the Williamsons have had to make temporary living arrangements. Most of them are living with the Rustons. Daughter Joylin is living with her in-laws.

“I’m still in shock from what’s happened,” Amber told The Valley Times-News. “We just have to get our thoughts together about what we can do. We’d definitely like to build back where we have been.”

Amber said she wanted to thank a lot of people who came by to check on them. “Kathy Hornsby of the Chambers County EMA came by here to see if there was anything she could do,” she said. “The people who are active with the Standing Rock Community Center came by to check on us. We appreciate everyone thinking about us in this very difficult time.”

Amber said she wouldn’t want what happened to her and her family to happen to anyone.

The modular home was in a great location. It was on a hilltop with impressive views of the surrounding countryside. The downside was that it’s in a very vulnerable location in stormy weather.

Fortunately, no one was in the home when the storm hit Thursday afternoon.

The Williamsons lived a short distance away from Korey and Trenton Pijnenburg, whose home was severely damaged in the storm. That area between Standing Rock and Evansville apparently bore the brunt of Thursday’s storm damage in Chambers County.

Autauga County in central Alabama was the hardest hit area of the state. A total of seven people were killed there. Two people were killed in Georgia. Portions of both states remain in states of emergency with some impassable roads and power outages.