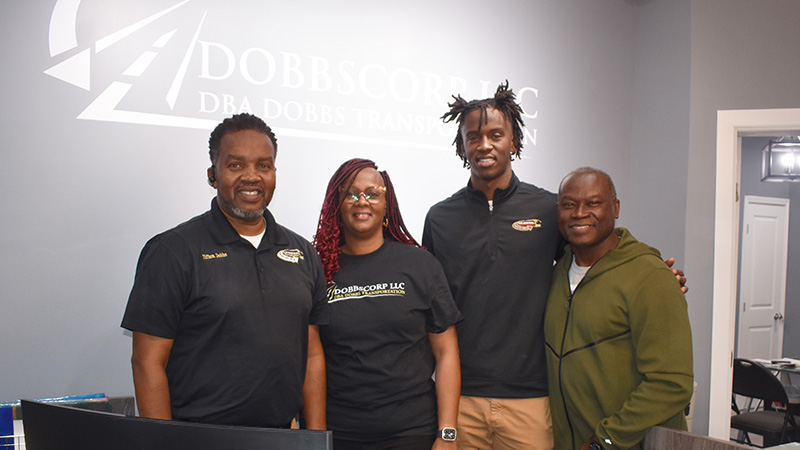 LANETT — Lanett’s old Greyhound bus station has gotten new life as a new bus station. It’s the headquarters for DobbsCorp LLC (DBA Dobbs Transportation), and the buses don’t just come and go, they are based there.

Company President Tifton Dobbs has six buses, five of which are 56-passenger MCI buses and one 38-passenger Temsa bus. A good portion of his business is transporting sports teams to various locations. He has taken Point University Skyhawk teams to destinations as far away as West Virginia, west Texas and Kansas. He also transports most of the teams from the Muscogee County School District and the high school teams in the east central Alabama-west central Georgia region.

“Point University is one of my valued customers, and so is the Muscogee County School District,” Dobbs said. “Muscogee County has been with me since I started my business in 2006.”

Dobbs gets lots of compliments on his buses, but it hasn’t always been that way.

He was with the Lanett Police Department in the late 1990s when he got his first bus.

“It was a yellow school bus,” he said. “I converted it into a bus I could carry my youth gospel chorus from place to place. Back then, I really didn’t have any ambition to get into the transportation business. I just wanted to sing and to get my youth singers to where they needed to go.”

When word got around that Dobbs had a bus and was driving people places, people started asking him if he would take places to destinations like Six Flags Over Georgia.

In those early days, some people made fun of Dobbs and his “raggedy” bus. There’s nothing raggedy about the bus fleet he runs today. He’s never liked the term raggedy.

“We have always worked hard for our buses to be clean and to provide a safe, comfortable ride,” he said.

While getting started, Dobbs worked for Destiny Charters out of Phenix City for a time and learned the ins and outs of transporting people by bus. He started his first business with the Rev. W.T. Edmondson of West Point. They called it D&E Charters, a name that was familiar through 2017. At that time, Edmondson left to devote more time to his funeral business in LaGrange.

“We changed the name to the Dobbs Corporation,” he said, “and were based on First Street in Lanett. It wasn’t anything fancy. We operated out of a utility building and had some space to park buses. I wasn’t looking for any high-end stuff. A lot of businesses fail because the owners want to be a high-end business from the start. It’s better to work your way up. I know God had a plan for me to do that, and I have trusted him all along.”

The First Street location was the second location of his business.

“Our first location was in the West Shawmut community across Magnolia Road from Newt’s,” he said.

In those beginning years, Dobbs had no established credit.

“God sent me people who had credit but couldn’t pay for their buses,” he said. “I tithe a lot in church, and people come to me because of that.”

The old Greyhound building sat empty for many years. The last business to be in the building was a beauty shop. A Cut Above was there before moving to its present location near Colorvision on Gilmer Avenue.

“I never even thought about the building until God led me to it in 2021,” he said. “I had driven past it many, many times and had eaten many, many breakfasts of pancakes and sausage at Sara Jay’s without ever thinking I could locate my business in the old bus station.”

As his bus fleet grew, Dobbs needed more space to run a business and park the buses. He started looking around, and the idea hit him about turning the old bus station into a new one. He got in touch with the building’s owner, Sidney James, niece of former Alabama Governor Fob James.

He gave the old building a thorough going over and liked what he saw.

“Some people thought I was foolish to try to remodel it into a new business,” Dobbs said, “but I was really impressed with the building’s roof and its walls. The only wet spot I found inside was where the water had been flowing off the street and under a back door. I knew I had something good when the roof and walls were in such good shape.”

The buyer and seller agreed to a price, and Dobbs had himself a bus station. To sweeten the deal, James had her husband, Auburn University architect professor Behzad Nakhjavan, design a building plan to convert the old building into something new.

There was much interior work to be done, but Dobbs didn’t hire a contractor. All the interior work was done by him, his son, Dee Dobbs, and Barry Watson.

Dobbs purchased a well-built structure and has turned it into something much better than it was when first constructed.

The original building went up during the days of Jim Crow segregation. Instead of having two restrooms, one for the men and one for the ladies, it had four due to segregation.

Just inside the front door is a large area where receptionist Kathy Grady takes all the information needed for a bus trip. She forwards the information with a contract and orders a dispatch for a bus. Nearby is an office for Tifton’s wife, Daphne, who is the accounts payable clerk for the business. Tifton, the company president, has a really nice office, and there’s a comfortable break room.

The Greater Valley Area Chamber of Commerce will be hosting a ribbon cutting at the new DobbsCorp LLC building in February. Guests can then see how someone with a plan can take something old and abandoned and turn it into something new and impressive.

Dobbs is the first to admit he’s on a plan, but it is not his. It’s God’s plan for him and his family.

He’s proud of the fact he was able to make the conversion with no borrowing.

Dobbs is known as the bus man by many area high school students. He is often asked to speak to student groups and likes to tell them that anyone can go from next to nothing to the good life by trusting in God and treating people right. He likes to show them a picture that was taken of him and his sister Ann in 1970. They were children at the time and were seated on the front steps of a sharecropper’s house. They were with their grandfather, Jake McFarland, who was living in a house that looked more like a barn than a place where most people would live.

The house is still standing in Troup County’s Cannonville community, between West Point and LaGrange.

“I was born without a plan,” Dobbs said. “I knew that my grandfather made a living by growing cotton, raising hogs and making sausage. We were poor and lived in a house with no running water. I didn’t see a flush toilet until I was nine years old. We loved each other, had faith in God and didn’t see ourselves as poor people.”

Dobbs grew up in a rough section of LaGrange and didn’t graduate from high school. He had trouble finding a job and had to settle for being a custodian at LaGrange College. There were times when he was picking up litter on the campus he would see people he had known in high school who were students at the college.

It inspired him to get a GED and seek admission to college.

“I wanted to be a policeman, but no one would hire me because of the neighborhood I had grown up in,” he said. “I knew I would have to earn my GED and somehow go to college to earn a degree in law enforcement.”

A cousin of his named Kenneth Parker helped him get into Columbus College, where he earned a degree in law enforcement. That’s what led to him becoming a police officer.

Two years ago, Dobbs repaid his cousin for what he had done for him.

“I drove to his house and asked him if had had one dollar,” he said. “He pulled out a dollar, and I handed him the keys to the truck.”

It surprised the cousin, but Dobbs took great pleasure in telling him “you helped me make my dreams come true.”

Before getting into the transportation business, Dobbs was the chief of the Lanett Police Department for several years. He’s now a member of the city council.

Why the first name Tifton, a city is south central Georgia that’s known as the Watermelon Capital of the World?

“My Aunt Virginia had been there and liked the name,” he said.