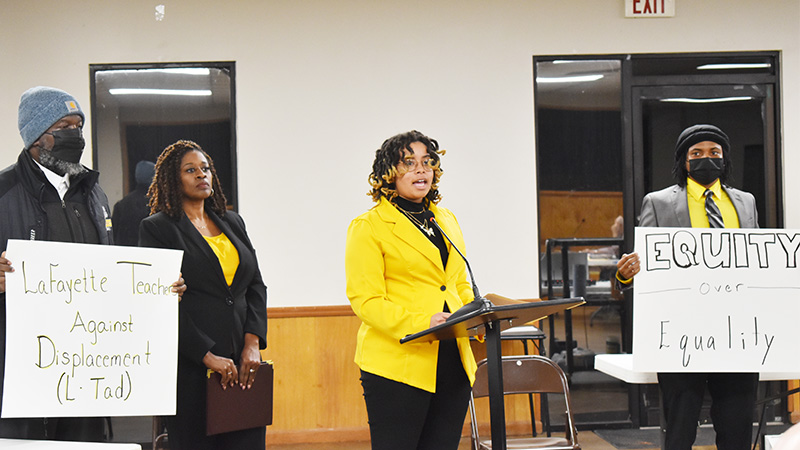 Two LaFayette High School teachers spoke on behalf of the LaFayette Teachers against Displacement (L-TAD) as a call to action during the LaFayette City Council meeting on Monday night. They announced a protest being held on Jan. 16 at 1 p.m. and called on the community and each council member to join them.

“We, L-TAD, publicly denounce the board’s decision to place the new consolidated school in Valley … We want the families, alumni, friends and allies of the LaFayette community to know that we stand with you, and this is far from over. There is still hope, but we can only win if we stand together as a community,” said LHS teacher Tytianna Smith during the meeting.

LaFayette teachers Smith and LaWendy Willis spearheaded the coalition after a meeting on Dec. 15 during which Superintendent Casey Chambley told the LHS faculty and staff that LHS school will be closed in May 2023 for the renovation of the new STEAM Academy.

He also said that LaFayette students would first be driven to Inspire Academy and then load onto a second bus to be taken to the new consolidated school.

According to Willis, this meeting was on the day after the public hearing in Opelika on the consolidated school with US District of Middle Alabama Judge Keith Watkins.

A group of eight teachers joined to advocate for a new consolidated school in an equitable location in LaFayette. The group’s mission statement is that it opposes the displacement of children in impoverished and rural communities and racially disadvantaged communities of LaFayette.

“We’re not going to let that happen — not without a fight,” Smith said to the council.

Willis said that L-TAD is concerned with the “12-hour shift, five days per week” that students will have with the added transportation time, the safety of elementary school children and the shutdown of multiple LaFayette schools.

Council members Terry Mangram, Michael Ellis and Toney Thomas announced that they would join the protest. All the present council members, and the mayor declared their support for the coalition’s mission and stance.

Mayor Kenneth Vines said during the meeting that he would continue to fight for the consolidated school to be in LaFayette. He also joined the council members in announcing that he would be marching with L-TAD on Jan. 16.

“I’ve been in the fight since day one, and I’ll continue to fight until there’s no breath in my body left to fight … I will definitely see you all on January 16th,” Vines said.

On Jan. 17, the L-TAD will continue the protest in Montgomery.

“We are one, and this affects us all,” Smith said during the meeting. “We are one community, we are one family, and we are one LaFayette.”

Last week, the L-TAD started a petition in support of their cause that has already gained 193 signatures.