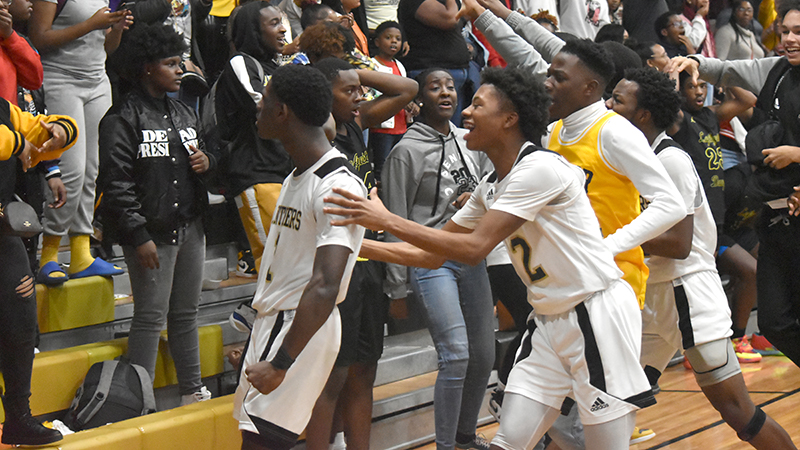 The Lanett-LaFayette rivalry may be coming to an end, but the potential final game will certainly be remembered in Chambers County as the Lanett Panthers beat the LaFayette Bulldogs 64-62 in double overtime on Friday.

It was a scrappy game where neither team took their foot off the gas, but the difference maker was Lanett’s Elijah Whitfield, who hit a deep three at the buzzer to send the game into double overtime and lead the Panthers to victory.

“I was trying to tie it up, so we could go into double overtime and beat them,” Whitfield said.

“I felt good. There isn’t a team in 2A fast enough to keep their legs in six quarters like us.”

Whitfield is also proud to have potentially created Lanett history.

“That was a great game right there,” McCants said.

LaFayette head coach Chase Lewis knew it was going to be a difficult matchup.

“It all started with that heave in the first overtime,” Lewis said.

“They made a big shot. I had everybody in foul trouble. My leading scorer fouled out in the fourth quarter. We had to hold it as best as we can. My guys competed well.”

The first half looked like the Bulldogs had slight control of the game as LaFayette led 29-24, but the second half was a battle to the finish.

The fourth quarter featured several lead changes, and neither team led by more than six.

Lanett had a 51-49 lead with 30 seconds left, but Bulldog Vaderrian Story hit a basket with ten seconds left to send it to overtime.

The Bulldogs had all the momentum in the first overtime as LaFayette quickly drew a 57-53 lead.

The Panthers closed the lead thanks to Nakia Bynum hitting a shot with a minute left to bring the game within one.

The Bulldogs converted after Bynum turned the ball over with only a few seconds left in overtime.

The Panthers inbounded the ball, and Elijah Whitfield hit a prayer shot from almost half court that sent the game to double overtime.

Double overtime was a battle of attrition as each team was playing for the final possession.

Whitfield had four points in the period to give Lanett a 63-59 lead.

LaFayette’s Tazarius Towles hit a clutch three with ten seconds left to close the Lanett lead to one, but Lanett was able to play defense on the last possession after hitting a free throw.

McCants was pleased with how Whitfield stepped up as a leader.

“This is his team,” McCants said.

“If he does what he needs to do every night, the rest will follow, and we’ll be a great team.”

“That’s what we do,” McCants said.

“We’re small, so we have to put pressure up and down on people. We have to make people feel uncomfortable. Once we have them playing faster than they want to play, we cause a lot of turnovers.”

McCants feels like these two teams will see each other again.

“It’s not over,” McCants said.

“I’m pretty sure we’re going to meet each other in the area tournament and in region play. We help each other try to make it to the next level.”

The Panthers will have less than 24 hours before they face their toughest challenge in the Valley Rams.

“We get ready for the next night. Everybody knows Valley is on top right now. I’m proud of those guys over there, but we’re coming to play tomorrow. I hope they strap their shoes up because we’re going to have a fight.”

McCants was also thrilled to see the crowd show up and make a difference.

“I think we’re back. We’ll get these wins rolling in so we can make a playoff run.”

For Lewis, he knows that the Bulldogs still have a leg up in area play.

“It gives us a chance,” Lewis said.

“We just have to take the long route. It would’ve been nice winning tonight, but I think my guys are ready for the test.”

Whitfield finished the game with 17 points while Nakia Bynum had 15.