‘I don’t know if I’m going to make it:’ Lanett resident was on phone with girlfriend as truck flipped in front of him 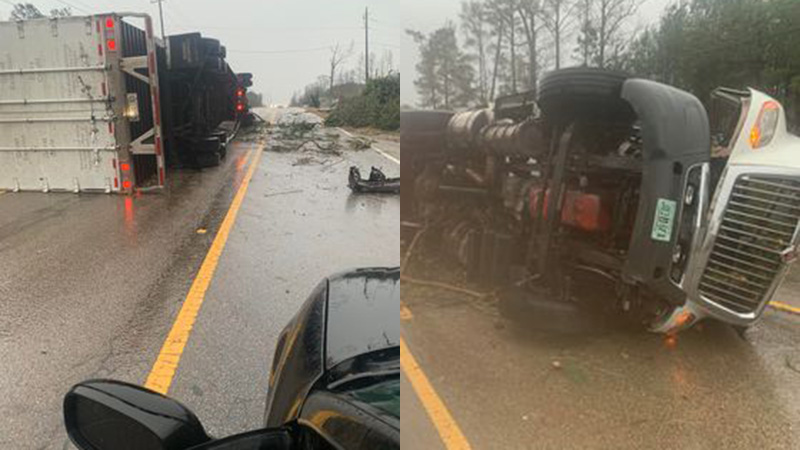 A Lanett native was right behind a flipping 18-wheeler Thursday afternoon when a suspected tornado crossed Whitesville Road.

Alex Combs said he was on the phone with his girlfriend when he saw the tractor-trailer begin to flip, and for a split second, he thought he was a goner.

“I saw that truck get picked up, and I ducked down in my car,” Combs said. “I was yelling ‘baby, I love you, I don’t know if I’m going to make it out of this, but I love you.”

The phone disconnected, Combs said he saw the truck flip to the right before ultimately flipping back to its left-side. He saw sparks from power lines and the taillights of the truck, but almost all visibility was gone.

“Everything stopped for a split-second,” Combs said. “I couldn’t see anything but rain and sparks from the power lines. The next thing I knew that truck had been flipped over to the right, and then it flipped back over to the left. The whole time I could feel my car flipping over a little bit… when [the truck] landed I was shaking, I was scared, I didn’t know what was going on.”

Thankfully, his car didn’t flip, and really didn’t sustain any damage other than just debris that had flown onto it. A few minutes later, his girlfriend called him back and was able to reach him — undoubtedly very glad to his voice.

Now that he’s lived to talk about it, Combs admitted he was actually a little frustrated that the 18-wheeler pulled out in front of him. He was trying to get back to work.

Now, he’s thankful for that small delay that might’ve saved his life.

“I am looking at things a whole lot differently. The only thing I can think is if I had beat that truck coming out, it would’ve been my car that would’ve gotten flipped and turned over. Only God knows if I would’ve made it through it or not. Seeing what it did to that truck, imagine what it would’ve done to my car.”

Combs immediately ran up and checked on the truck driver, who he said sustained minor injuries.