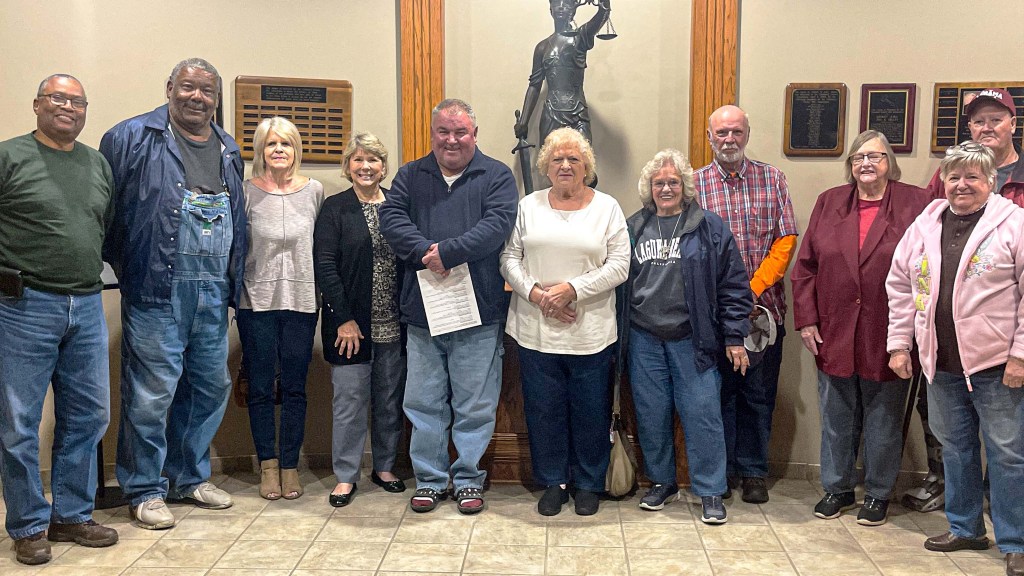 At the Chambers County Commission meeting Monday, commissioners and department heads began by thanking everyone from the Chambers County EMA, highway department, first responders and the volunteers in Standing Rock for their efforts before, during, and after the storms on Thursday, Jan. 12. Several residents of the Standing Rock community were in attendance to hear the kind words of support and praise from the commission.

That day started as any normal day in Chambers County. The weather forecast called for storms, but it was hard to know what would eventually plow through the area.

Two confirmed tornadoes touched down in the county, causing extensive damage to homes and properties from the northwest corner down to the Standing Rock area.

Luckily, there were no injuries or loss of life associated with these storms. However, there have been several families displaced from their homes.

Clean-up work began almost immediately after the storm cleared the area, and in Standing Rock, the volunteers came out of the woodwork to assist their neighbors.

District 2 commissioner Doug Jones began the conversation by thanking everyone that came together to assist after the storms cleared the area.

“I’d like to take this opportunity to thank the [Chambers County] EMA, highway department, sheriff’s department, volunteer firemen,” Jones said. “When we start calling names, we have a tendency to leave people out, but I want to say thanks to all the volunteers who came out and assisted.”

District 3 commissioner James Williams was heralded by the commission as the person who organized the volunteers and put them in the best position to help. He was overcome with emotion when talking about how proud he was of the Standing Rock community and the county.

“We had volunteers from Randolph County, City of Roanoke and the whole volunteer fire department,” Williams said. “But the ones I’m real proud to say I’m proud of is the citizens of Standing Rock. You showed what you are supposed to do. The workers that were there on Friday, on Saturday that came out, the power company, highway department, it didn’t matter … the folks in Standing Rock fed them, there was a hot meal there for them. Thank you again to the city.”

Allen said although Standing Rock is out of his fire jurisdiction, it is well within the jurisdiction of his EMS service. Allen told VTN as soon as he determined that the City of Lanett had not sustained any significant damage or no injuries, he turned his focus to Standing Rock and was impressed with what he saw and heard on the radio.

“I was very impressed that by the time I got up there, our volunteer departments were already at work,” Allen said. “They were out working in force. They were working together. I was monitoring them on the radio. They work very, very well together, they were coordinated. They had a plan, you could tell just by listening to them on the radio that they had a plan … I felt comfortable that if we had any EMS calls up in that general area, that we would not have any real issues in getting to them, whether they have been storm related, or just typical medical calls.”

Allen applauds the work done by all volunteer departments saying, “I cannot say enough about our volunteer department,” Allen said. “I mean, these are men and women who out there, a lot of times they take money out of their own pocket to put fuel in their vehicles to get equipment, to feed community members that may be on hard times or may have been hit particularly hard by a storm or some type of disaster.”

County Engineer Josh Harvill said that in total, there were 40 roads impacted throughout the county, and with the volunteer help, he says, they could not have done their jobs more efficiently.

“We most certainly would not have been able to do our job without you all, without all the volunteers,” Harvill said. “I know how appreciative you all have to be seeing where everyone came to help. The relationship that we have with the volunteers in this county, I challenge it against anyone, and I am proud to be a resident of Chambers County.”

Harvill also noted that not only homes and property sustain damage, but landowners also suffered significant losses. Assistance for landowners is already available through the National Resources Conservation Service (NRCS). The nearest extension office is located at 600 S 7th St Suite 1 in Opelika.

Sheriff Jeff Nelson, who was not officially sworn in when the tornadoes barreled through, also applauded the volunteer efforts.

“They got that road opened, and the volunteers were able to go on the side roads and clear those,” Nelson said. “It worked like a well-oiled machine. County crews were able to get what they needed taken care of to open roads. I worked disasters from one end of this state to the other, and that’s probably one of the finest examples of teamwork I’ve ever seen. It’s just a miracle we didn’t have somebody killed.”

Nelson said he did not hesitate to head out to the area to provide assistance as well.

“I wasn’t sheriff yet, I hadn’t been sworn in yet, but that’s the way I am. We’re going to go,” he said. “[We] went up there myself and the youngins [with] chainsaws, pulling trees, and that’s what we do. That is how we take care of each other in this county.”