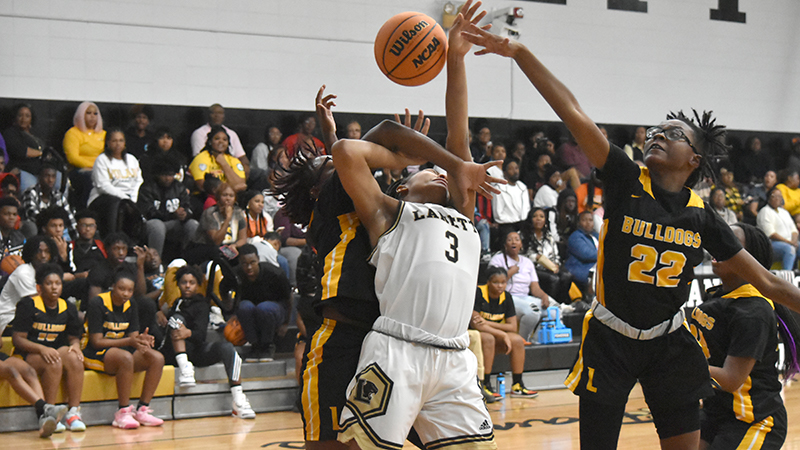 The Lanett Lady Panthers have dominated their last several opponents using their height and suffocating defense.

This was no different as Lanett dominated the LaFayette Bulldogs 63-14 at home on Friday.

Lanett head coach Charlie Williams is pleased to get the win, but he knows his team still has work to do.

“I was just trying to clean up the things we messed up on last time. We defended well. I just want to fix our execution on offense. We’re way too stagnant on offense.”

The Lady Panthers controlled the game from the start, but Williams feels like they let the Lady Bulldogs hang around.

Lanett did take a 16-7 lead at the end of the first quarter, but the floodgates opened from there as the Lady Panthers led 40-7 at halftime.

For LaFayette head coach Thaddeus Tucker, he knew that Lanett was going to be a challenge.

“We prepared in practice,” Tucker said.

“We went over everything they do from pressing to trapping to where they play defense. We thought we had them. It’s different in practice from actually seeing it live. It was a ton to handle.”

“We have great rebounders. Ameria [McClure] got in foul trouble early, so she couldn’t play much anymore. It’s kind of hard to rebound between the twin towers [MaKiah White and Laila Lancaster]. The perimeter was the problem. They closed on the ball fast.”

Tucker was pleased with how his girls showed up in the first quarter.

“We just got into foul trouble,” Tucker said.

“We couldn’t rebound. We couldn’t inbound. Taniya Collier got really tired. She played the whole first half with no break. You don’t scheme for that. That changed the dynamic. We played good defense initially. We got some pretty good looks at the bucket early, but everything flipped upside down on us.”

Tucker wants his girls to learn from the tough loss.

“We have to play through adversity,” Tucker said.

Williams is pleased to get the win, but the rivalry wasn’t the most important part of the game.

“It doesn’t mean anything to me really,” Williams said.

“At this point in the season, you just play who’s in front of you. You just play.”

“If we don’t have a blue trophy at the end of the season, rankings mean nothing,” Williams said.

The Lady Panthers are really close to securing home court advantage for the area tournament.

“If we beat Reeltown on Tuesday, we clinch it,” Williams said.

“I love the progression of this team. I just wish we were a little cleaner in games like this. We have too much sloppy play. It’s all about repetition. We come out hard. It’s not the effort. It’s just the finishing product.”

The Lady Panthers’ defense has propelled them to number four in 2A by the ASWA, but Williams knows his girls have to keep putting in effort.

“It’s all about effort and jumping to the basketball,” Williams said.

“If you don’t put in effort and jump to the basketball, bad things are going to happen.”

The Lanett girls will have less than 24 hours before they play a Saturday matinee against the Valley Rams.

Lanett’s Ariel Hall was the leading scorer for the Lady Panthers with 11 points while LaFayette’s Aronique Kyles had six.