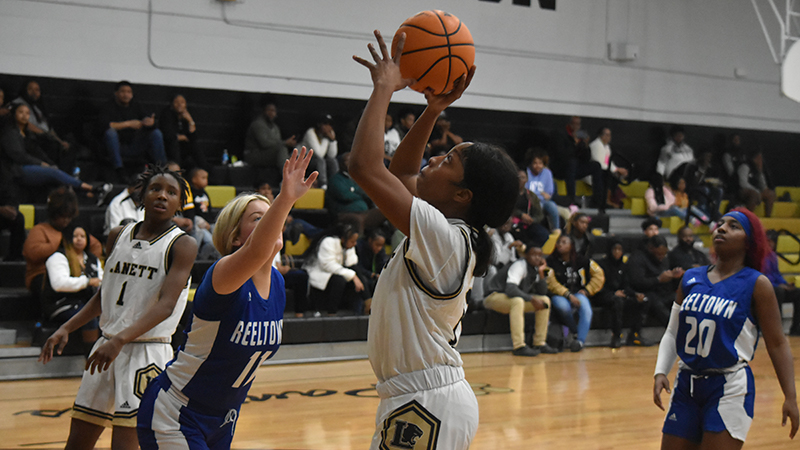 The Lanett varsity girls continued their dominant run of games with a 70-22 win over area opponent Reeltown on Tuesday.

The Lady Panthers have now won nine in a row and haven’t allowed more than 33 points in a game during that span.

Lady Panthers head coach Charlie Williams is pleased with where his girls are at right now.

“I just wanted them to come out early and get some energy in this gym,” Williams said.

“Nights like these is hard. After you come off of Friday and Saturday where you’re playing in front of the whole county, you come in here today, and it’s just the whole school watching. A lot of my young girls got some playing time today. When you have four seniors who are about to graduate, you have to get the younger girls some playing time.”

Williams isn’t worried about winning the state title yet despite his team looking like contenders.

“We just play one game at a time,” Williams said.

“When you tart looking ahead, that’s when something bad happens to you.”

While Lanett has won each of their last seven games by a sizable margin, Williams wants his girls to stay focused.

“We’ve been there [the postseason] two years in a row. We know what it’s like to not finish,” Williams said.

“That’s all they talk about is finishing. They’re obsessed with it. They’re ready for tournament ball, but we have to play these games. They want to jump right into tournament mode.”

Williams feels like his team is peaking at the right time this season.

“This is what I wanted,” Williams said.

“I didn’t want to be playing like this early in the season. We have a veteran team. Every season has its own story. This is our story this season. Last year, we peaked too early.”

“I think they’re locked in more because they know what’s at stake,” Williams said.

“You want to play at your gym for the area tournament in front of your fans.”

As for the Reeltown game, Williams was pleased with how his team played overall.

“They shared the basketball. Nakeriona Heard made some outstanding passes. Her vision is growing every time she plays.”

The freshman point guard had eight points on the night.

Williams wants his girls to start games strong for the rest of the season.

“We need the mentality that we don’t need to wait to play,” Williams said.

“They want to wait and see what the team is going to do to them instead of just coming out and playing.”

The Lady Panthers will look to solidify their lead in the area while extending their win streak to 10 on Friday against Horseshoe Bend.