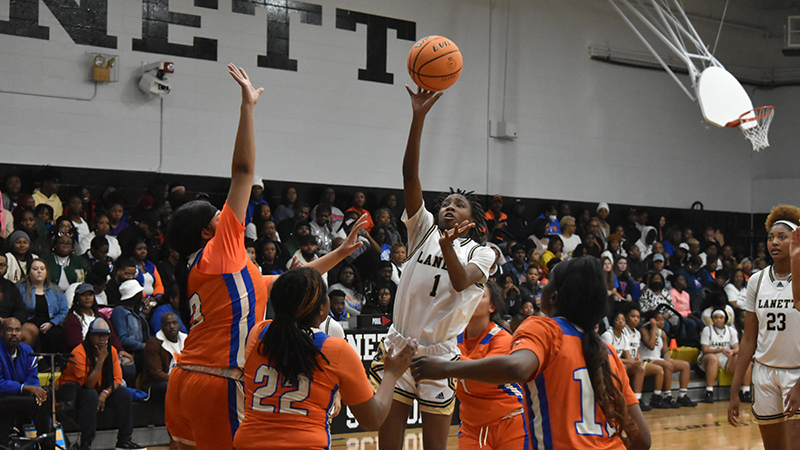 The Lanett varsity girls continue to dominate their competition as the Lady Panthers defeated Valley 50-15.

The Lady Panthers suffocated the Lady Rams from the start as Valley only had two points in the first quarter.

After taking a 10-2 lead at the end of the first quarter, the Lady Panthers continued to use their combination of speed and size to only let Valley score two field goals in the entire first half.

Lanett head coach Charlie Williams is proud of how his girls showed up.

“We played good defense, and we came out with energy,” Williams said.

“We have to learn how to play like this. Once you get around tournament time, you’ll deal with games on gap days.”

The Lady Panthers had to face a 5A team, but Williams doesn’t feel like it was too much of a challenge.

“Basketball is five-on-five. It’s not 2A versus 5A. If my five is better than their five, it doesn’t matter what class it is.”

The Lady Panthers have now won eight in a row, and they haven’t allowed more than 33 points in that span.

Williams is pleased with his team’s defensive dominance.

“Laila Lancaster had a really big game today. Ariel Hall had a really good game. Nakeriona Heard sparked the run with her energy. Everybody played well.”

Lanett will focus on area play as the Lady Panthers will have two area games next week.

“You just take it game by game,” Williams said.

“Every game is its own challenge.”

Lanett is now 12-2 and is the fourth ranked team in 2A according to the Alabama Sports Writers Association.

Lancaster was the leading scorer for the Lady Panthers with 12 points.

The Lady Rams fall to 5-12 and will face Tallassee on Tuesday.