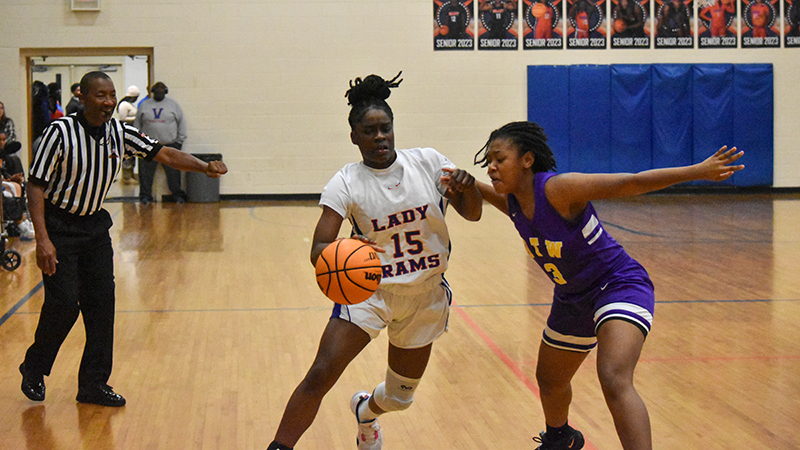 Coming off of an area win over Beauregard, the Valley varsity girls looked to carry the momentum into a home game against Booker T. Washington, and the Lady Rams did that in Valley’s 33-31 win over the Golden Eagles.

Valley head coach George Grimes is pleased with how his girls fought in the second half.

“I told them at halftime we have to find a way to get into the fourth and grind it out,” Grimes said.

“We were a little more consistent making baskets, and the defense held on.”

The first quarter was a back-and-forth battle between the Lady Rams and Golden Eagles as neither team could lead by more than two points.

The teams were tied at eight heading into the second quarter, and nothing really changed in the next eight minutes.

The Golden Eagles did take a 15-11 lead, but Valley’s Kenda Watson got a key steal and immediately scored to prevent a full momentum swing.

Neither offense was clicking, but second quarter fouls helped the Golden Eagles take a 17-15 lead at halftime.

The third quarter was more of the same as the largest lead for either team was a 23-19 lead for the Lady Rams.

Valley took a 24-23 lead heading into the final eight minutes, and the Lady Rams found their rhythm in the fourth quarter.

With only a couple minutes left in the game, Valley had the largest lead by either team with a 33-27 lead.

The Golden Eagles fought back as they capitalized on a few Valley turnovers, and with only 26 seconds left, Booker T. had a chance to tie the game.

After holding onto the ball for all 26 seconds, the Golden Eagles attempted one last contested shot.

Booker T. Washington couldn’t convert, and their head coach was ejected after he thought there should’ve been a foul on the final shot.

Although it wasn’t an easy win, Grimes is pleased to have back-to-back wins.

“It’s better than losing two in a row,” Grimes said.

“They needed some confidence. I’m proud of how hard they worked. It’s a good feeling.”

Aniyah Robinson was the leading scorer for the Lady Rams with 10 of Valley’s 33 points.

“We didn’t let the press bother us as much,” Grimes said.

“We got some opportunity on the offensive end. We have to keep grinding and find a way. That starts on defense. It gives us a chance to be in the ball games at the end. We have three tough games next week, so we’ll be tested.”