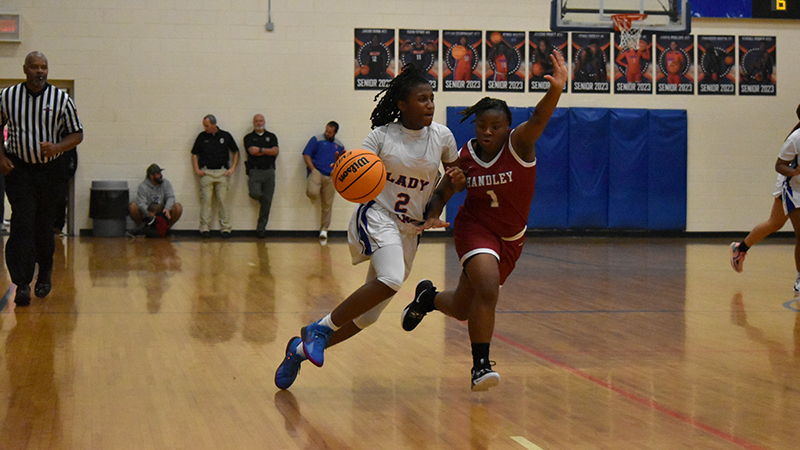 The Valley varsity girls fought back in the final three quarters to overcome a 15 point deficit, but it wasn’t enough as the Handley Tigers took home a 46-37 victory on Wednesday.

Valley head coach George Grimes explained what happened in the early stages of the game.

“We got off to a slow start,” Grimes said.

“We didn’t get our motor going early.”

It was a slow start for the Lady Rams in the first half as Valley struggled to get anything going offensively in the first quarter.

Valley only made two field goals in the first quarter, and the Lady Rams dug themselves a 16-6 hole heading into the second quarter.

The Lady Rams found some life in the second quarter as Valley was able to close the Handley lead to six as the Lady Rams went on a 6-0 run.

Turnovers started to plague Valley toward the end of the second quarter, and Handley took a 29-17 lead heading into halftime.

The Lady Rams got some help in the third quarter with both Handley’s coach and a player being assessed a technical foul.

The Lady Rams missed all four free throws, and Grimes knows that made the biggest difference.

“It’s one of those things we talk about in practice,” Grimes said.

“They know the deal. With a team like us who doesn’t have a high volume of scoring, free throws are so important. We missed six or seven alone in the thrid quarter.”

Valley couldn’t close the lead in the third quarter, and Handley took a 34-29 lead heading into the final eight minutes.

The Lady Rams pulled closer in the fourth quarter thanks to several Handley turnovers.

Valley brought it within six, but the Lady Tigers were able to hold onto the ball and run the clock down.

Despite the loss, Grimes is proud of how his girls fought.

“I told the girls they could play with Handley,” Grimes said.

“It just came down to us getting some shots and getting on a run, which happened in the second quarter. We played well defensively. We’re getting better. That’s what’s important here in the next month before the area tournament. We communicated well and hustled.”

The Lady Rams will now look forward to area play, and Grimes feels like they’re ready.

“We have two more games before play Beauregard next Tuesday,” Grimes said.

“We have two more chances to get better before area play. We’ll be ready for Tuesday. We have to find a way to get over the hump.”