Lady Rams fall to Handley on the road 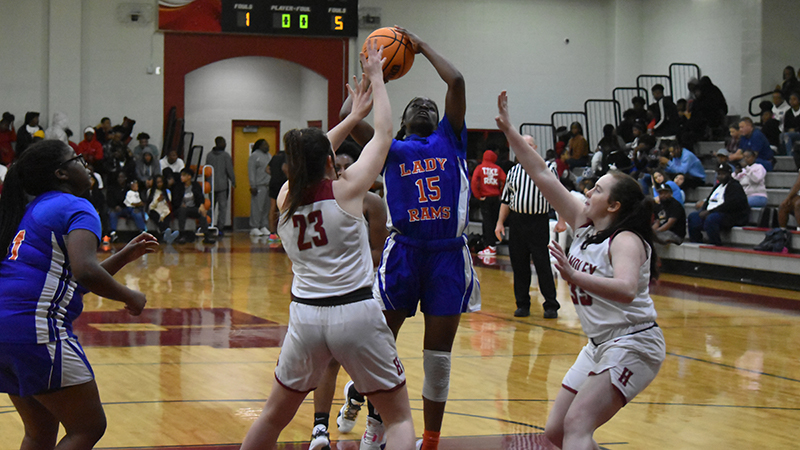 The Valley varsity girls faced the tall task of traveling to Handley to face the Lady Tigers in a rematch, but the Lady Rams fell short in their 54-21 loss on Wednesday.

“We got off to a slow start. We started digging out a little bit, and then we went backwards.”

The first quarter was a disaster for the Lady Rams as it took Valley eight minutes to get on the board.

The Lady Rams were able to stop the bleeding when Kenda Watson hit a jumper to end the 16 unanswered points for Handley.

The Tigers took a 16-6 lead at the end of the first quarter, and Watson had all six of Valley’s points.

The second quarter wasn’t much better for Valley as the Lady Rams struggled with turnovers and fast break defense.

The Tigers scored 15 in the second quarter to take a 31-10 lead at halftime.

Watson was the leading first half scorer for the Lady Rams with six points.

The second half was more or less a mirror of the first half as the Lady Rams couldn’t seem to convert on offense and stop Handley’s transition game.

Grimes knows that one game doesn’t define the season.

“We just didn’t get the job done tonight,” Grimes said.

“It’s basketball. You just have those nights. We didn’t play like we’ve been playing the last few weeks.”

Valley was coming off of a two game win streak, but Handley proved to be too tough.

“We didn’t play a gritty defense. We have to get it out of our minds and forward to Friday. We didn’t take care of the ball. We just kept turning it over.”

Grimes was pleased with how his girls played the boards.

“We found some people who can rebound off the bench,” Grimes said.

“We handled their press pretty good. That gives us issues every once in awhile.”

Watson was the leading scorer for the Lady Rams with six points.

Valley will return home to face Beauregard on Friday.