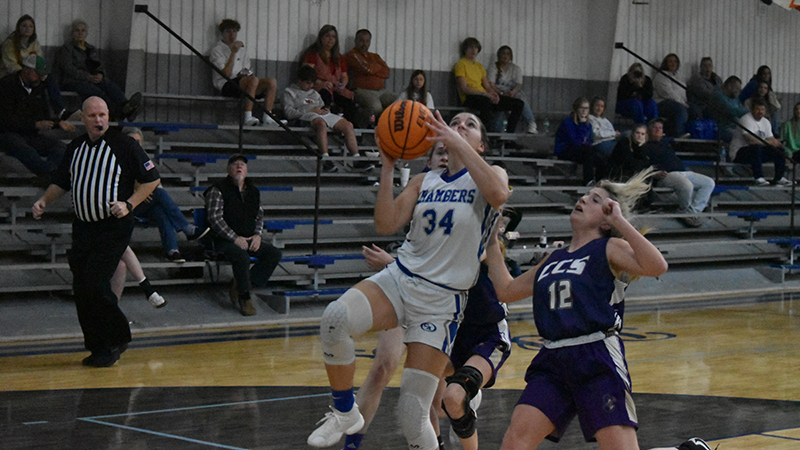 The Chambers Academy varsity girls have seemed to find their groove as the Lady Rebels earned a much needed 59-15 win over Cornerstone Christian on Monday.

Chambers Academy head coach Jeff Hines is pleased with how his girls have developed over the season.

“We want to play to a standard,” Hines said.

“We have to play like we’re capable of playing. I thought we shot the ball well. I thought MacKenzie [Gilliland] played her best game as far as handling the offense. We have to get better blocking people out. These girls have really grown up. They’ve learned a lot, and they still have a long way to go.”

The Lady Rebels started the season 0-6, but they’ve won eight of the last 12 to improve to 8-10 on the season

The Lady Chargers hit a couple three pointers to close the lead, but the Lady Rebels continued to play solid defense while the transition game produced points.

The Lady Rebels took a 16-8 lead heading into the second quarter, and things just went up from there.

Chambers Academy took a 34-13 lead at halftime, and the Lady Rebels were able to control the second half.

MacKenzie Gilliland led the Lady Rebels in first half scoring with 14 points.

The Lady Rebels controlled the entire second half as their defense only allowed two second half points as Chambers Academy dominated on both sides of the ball.

Hines is pleased with how his defense stood up.

“We have to be more active on defense because it feeds us on offense,” Hines said.

“That’s the plan going into every game.”

Hines is also pleased that his bench players got some experience in the second half.

“Our bench is having to play a lot,” Hines said.

“I’m proud of this bunch. There are a lot of people who wrote this team off when we were 0-6. That’s a credit to them.”

Hines feels like starting the game strong is key to controlling the game.

“We’ve talked about it all year,” Hines said.

One of the things Hines wants his team to work on is layups.

“That’s been our Achilles’ heel all season,” Hines said.

“We have trouble finishing. We’re not where we need to be to win at the level we need to win at.”