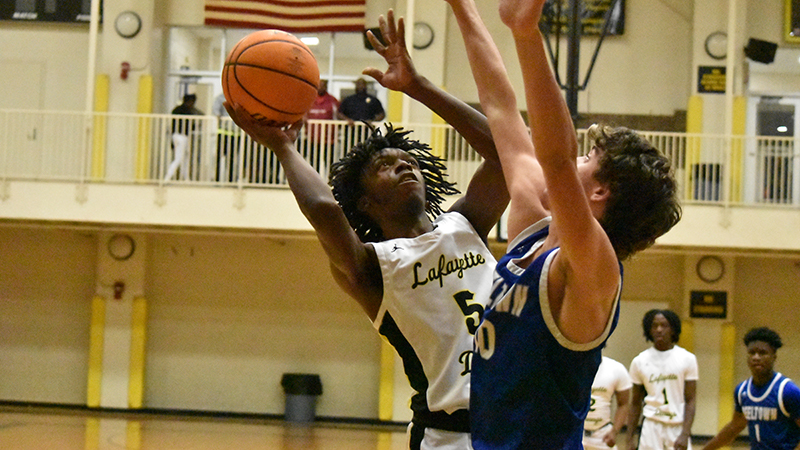 It wasn’t pretty, but the LaFayette varsity boys pulled off a 47-40 victory over area opponent Reeltown on Tuesday.

LaFayette head coach Chase Lewis wasn’t pleased with how his team played, but he still was glad to get the win.

“We have to do better,” Lewis said.

“I think we just had a lack of energy. There was nothing going on here in the gym. Our guys just kind of went through the motions. It was a hard win, and they made it hard on themselves. We did come out with a win and are 2-0 in the area, so it’s a good thing.”

The Bulldogs got off to a slow start as Reeltown’s height in the paint created some issues for LaFayette’s post game.

The Rebels led the Bulldogs 11-7 at the end of the first quarter, but the lead wouldn’t last long.

LaFayette came out firing in the second quarter as they opened with a 13-0 run and only let the Rebels score two points in eight minutes.

The Bulldogs took a 20-13 lead at halftime, but the Rebels wouldn’t go away.

Both teams traded baskets in the third quarter, but the Bulldogs never gave up their lead.

LaFayette never led by more than four in the third, and DeAundre Vines hit a three pointer at the end of the quarter to give the Bulldogs a 33-29 lead.

LaFayette looked like it was going to run away with the game after going up 39-31 at the start of the fourth quarter, but Reeltown was able to make it a three point game with only a minute left.

The Bulldogs did a good job of hitting free throws at the end of the game, and LaFayette escaped with an area win.

Lewis knows that the lack of energy was their biggest enemy.

“We had no energy in the first quarter,” Lewis said.

“We were dry. Reeltown came to play. They made some good shots. Their number 10 [Blake Smith] dominated us. Number 2 [Finley Henderson] dominated us. We were just trying to survive those guys. We did a good job surviving. We got out with a win. We have Horseshoe Bend on Friday, and they’re really good.”

Although Reeltown had a lot of size, Lewis doesn’t feel like that was the biggest issue for his team.

“We have decent size,” Lewis said.

“Number 1o works so hard that it made it hard for us to do anything. We just have to play better against the zone.”

Lewis wasn’t pleased with any particular aspect of his team, but he was still glad to get the win.

He also wants his players to have more energy heading into games.

“We have to build up energy in practice,” Lewis said.

“I have to do a better job of making sure that I have harder practices. We just tried to rest our legs a little bit and shoot some. If we don’t come out on Friday, we’ll be in trouble. At the end of the day, we can get to 3-0 in the area. Let’s just make sure we win all our home area games.”

Tamarion Harrington was the leading scorer for  the Bulldogs with 14 points.