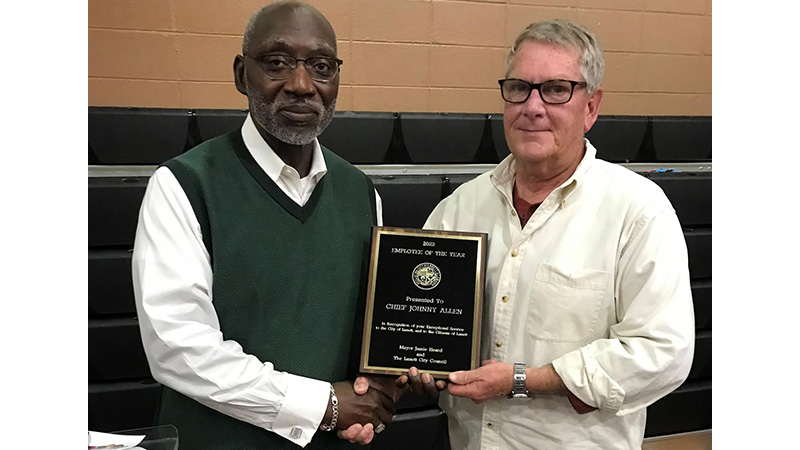 The city of Lanett recently honored Fire & EMS Chief Johnny Allen for his hard work with the Employee of the Year award.

“I was very shocked. I was very, very humbled, and I was very grateful,” Allen said. “The only way I could have achieved that award is that I’ve got good people all around me.”

For all but approximately seven of the past 40 years, Allen has served the city of Lanett. Born and raised in Lanett, he began his career at a private ambulance service while still in high school. He joined the full-time staff of Lanett Fire & EMS in 1982.

“My mom was in the medical profession for some time, and I think that’s maybe where I got it from,” Allen said. “But I really enjoy the EMS side of Fire & EMS business. I always have. It’s an opportunity to take care of people when they need it most.”

Allen returned to the department in 2008. The following year, he was promoted to fire chief. His philosophy has always been to take care of the citizens, one that has germinated in the rest of the staff.

“Whatever success we’ve had, that’s the reason. They’re dedicated to the job and to the citizens of Lanett,” Allen said.

Over the years, Allen has also served on the Chambers County 911 Board and the Chattahoochee Valley Water Supply District. Allen said the emergency communications and dispatch center has done excellent work.

“I think we’re second to none. We’ve got some very dedicated people out there and some people know their stuff, they really do,” Allen said. “Those dispatchers, they’re more important than we are because if they don’t do their job, we’ll never be notified that there’s a problem out there. They do an amazing job every day, and they don’t get near the credit they deserve.”

Allen has also worked on several city projects over the years, including the repairs on the downtown fountain and the municipal airport. Also, the relationships Lanett Fire & EMS has built with neighboring cities has opened many opportunities.

“There’s a lot of behind-the-scenes things that go on there that the general public don’t realize, and that’s possible because the working relationship that we havem and I’m pleased with that,” Allen said.

“They go above and beyond,” Allen said. “Volunteer fire departments are a strong organization, and I appreciate what they do for the county.”

For the past 11 years, Allen has also participated in the annual Christmas Parade. Each year, he helps organize the floats for the parade, which spans across three communities: West Point, Lanett and Valley.

This year, the Christmas Parade was the largest that he and Valley Recreation Director Laurie Blount could remember. Allen praised Blount for her hard work.

“I think the whole county is poised for growth, and I’m a county-wide person. I think there’s a lot things that should be consolidated, and we should come together to work on,” Allen said. “It would be positive for a lot of people and especially for the future of the children in our area.”

Allen said he looks forward to coming into work each day. Part of the joy of working for the Lanett Fire and EMS is that they have the best equipment.

Allen said all the city departments are dedicated and work well together. He said there is great collaboration and support from the mayor and city councilmembers. It’s important to him that his staff has the equipment that they need in the field.

Allen said he coudn’t have gotten the Employee of the Year without the people who surround him at work. The department works so cohesively that everyone in the department is integral to their success.

“Every one of them are very special to me personally. We’re like a family. That’s cheesy, but we are. Everybody’s always there for each other if something happens in one of their families,” Allen said. “Every single one of them is vital to our operation.”