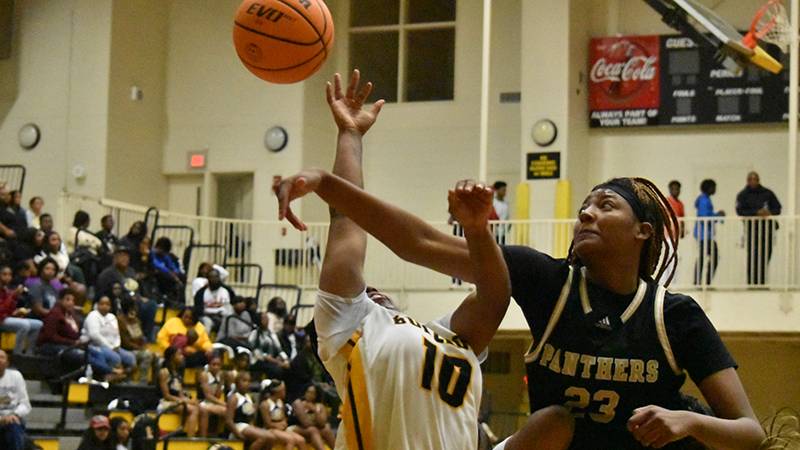 In a game where Lanett did everything right and LaFayette didn’t, the Lady Panthers came out on top 54-18 using their dominant interior defense and post presence.

Lanett head coach Charlie Williams was thrilled with his girls getting the area win and a rivalry win.

“We started off with energy early,” Williams said.

The first quarter was all Lanett as the Lady Panthers opened with a 9-0 run.

The Lady Bulldogs got on the board five minutes into the game with a three pointer by Aronique Kyles, but Lanett’s defense continued to plague the Lady Bulldogs.

Lanett took a 17-6 lead heading into the second quarter, and the Lady Panthers continued to do what they do best.

MaKiah White and Laila Lancaster continued to dominate the interior, and LaFayette’s only first half points came frombeyond the arc.

Lanett’s MaKiah White led the team in first half scoring with eight points while Kyles had all nine first half points for the Lady Bulldogs.

Lanett took a 36-9 lead at halftime, and the Lady Panthers never slowed down.

Lanett held LaFayette to only nine points in each half, and LaFayette head coach Thaddeus Tucker knows he needs more of his girls to step up.

“Our girls weren’t getting back on defense. We got outrebounded. We relied on Aronique [Kyles] far too much. We have to get her some help. Our game didn’t run as smooth. We have a lot to work on, but we’ll be OK.”

Despite the tough loss, Tucker is pleased to have a good perimeter shooter in Kyles.

“It’s always nice to have someone who can score points,” Tucker said.

“We need more than just her. It’s all about a want to. You have to want to play. You can’t give up. You have to fight for position and fight for rebounds. We have to work on layups. We missed far too many easy layups.”

Kyles finished the game with 16 of LaFayette’s 18 points.

Williams is proud of how his girls dominated defensively.

“We have size, and that’s a big factor,” Williams said.

“Their Kyles was really good and made some tough shots tonight. We shared the basketball very well. The girls made extra passes to give a shot to their teammate.”

Williams knows the rivalry is important, and he’s sad to leave John T. Woody court for possibly the last time.

“It’s kind of sad seeing that LaFayette may not be a school next year,” Williams said.

“They’ve been my rival ever since I’ve been at high school. We enjoy coming here. It’s one of those places you circle on your calendar because of their fans. Their fans come to support them, and they bring the best out of your team.”

Williams also feels like his team is in a good spot.

“My girls are confident. I want to be playing good in January. We need to work on layups.”

Lanett was able to get some bench players some playing time as well.

“It’s always good to get them on the floor, especially with an atmosphere like this,” Williams said,

“Next year, they’ll be in an atmosphere like this.”

MaKiah White was the leading scorer for the Lady Panthers with 12 points.

Lanett won’t have a lot of rest as they play Booker T. Washington at home on Saturday.