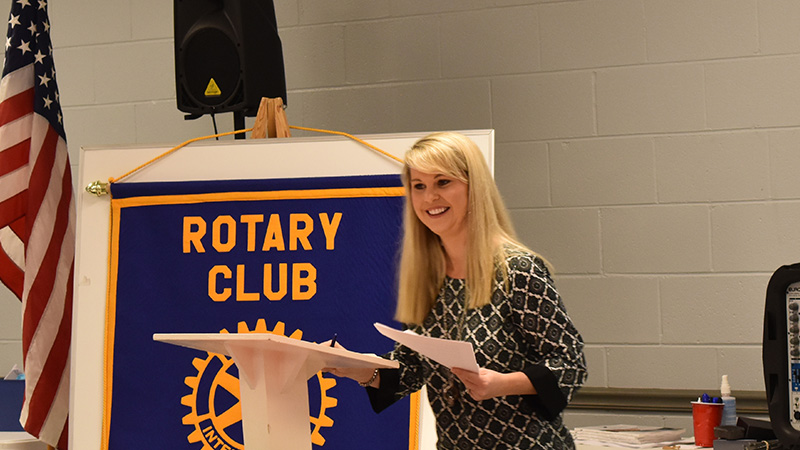 On her first day as the new executive director of LaFayette Main Street, DeAnna Hand talked to local business owners about the four-point approach of the organization and upcoming plans during Tuesday’s LaFayette Rotary Club meeting at LaFayette First Baptist Church.

Sheriff Sid Lockhart, who is retiring this month, introduced Hand as the guest speaker. Hand was elected to be executive director at the end of December. She has a master’s degree from the University of Alabama and past experience in program management. A native of LaFayette, she hopes to see the city continue to develop economic and population growth as well as enhance its small-town charm.

“Our town is really special. We know what it means to really be relational and have good partnerships and communication with one another, and I want to see that build. I want to see that flourish,” Hand said. “I really am excited that I’ve been offered this position with Main Street because I think that really encompasses what Main Street can bring to LaFayette.”

Hand spoke about Main Street Alabama, the organization that granted LaFayette its designation. LaFayette was one of four towns that were chosen, joining the ranks of Opelika, Wetumpka and many more. There are 32 designated communities, 39 network members and one aspiring community.

“Main Street does more than just host wonderful events, put on downtown fairs and celebrations. It really hopes to strengthen your economic development base,” Hand said. “You want to enhance the city’s tax base and foster those entrepreneurship relationships.”

To accomplish these outcomes, Main Street Alabama uses a strategic four-point approach. The four points are organization, or cultivating partnerships; promotion, or showcasing the town’s unique characteristics and what the community stands for; economic vitality, or establishing new businesses as well as supporting long-standing businesses; and design, or enhancing the curb appeal of downtown.

“Like raising a family, sometimes it takes a village,” Hand said.

Hand also recapped what has already been accomplished since LaFayette was designated a Main Street community in June. A board was elected, and the organization’s mission statement and goals were established. In June, they held the Taste of LaFayette event to announce the designation.

“There’s a lot that has been done over the last six months to really maintain and create a strong foundation of who we are,” Hand said.

Since the designation, there have already been pledges and fundraisers, according to Hand. However, the executive director hopes to continue growing contributions.

Looking ahead, members from Main Street Alabama will be visiting from Jan. 24-26 to tour local businesses. In February, Main Street LaFayette will hold its first Community Coffee Hour to get the community involved and get feedback.

The LaFayette Rotary Club president Dr. Abigail Adams, originally from Auburn, owns Auburn Opelika Dental in LaFayette. Though she is not a member of Main Street, she provided letters of support for its designation.

“I saw Opelika go through the process and go from a place where you don’t really want to hang out to a place where everybody really wants to go, so I was really excited about the prospect of LaFayette being able to do that,” Adams said.

Adams said there is empty space near her business on the second floor of the building that she hopes to see Main Street LaFayette make good use of. She also hopes the organization will encourage more young families to move into the area.

Stanley Tucker, owner of Farmers and Merchants bank in Huguley, is a board member of Main Street. Being a native of LaFayette as well as a business owner, he believes the organization will help the community thrive.

“We’ve already had some renovations and new things open up, so we’re optimistic that we can take it to another level,” Tucker said.

Hand also discussed the different avenues in which the community can participate in Main Street’s efforts. Individuals can join as a member, contributor or sponsor. Sponsoring allows the opportunity for marketing. Businesses that sponsor will be showcased through social media, print advertising and in Main Street events. Hand hopes to begin a community newsletter to help with promotion as well.

“I may be a little too ambitious because I’m getting excited about everything we can do, but I want someone to be ambitious and driven, and I want our entire network of volunteers and companies to be that enthusiastic about what can happen,” Hand said.