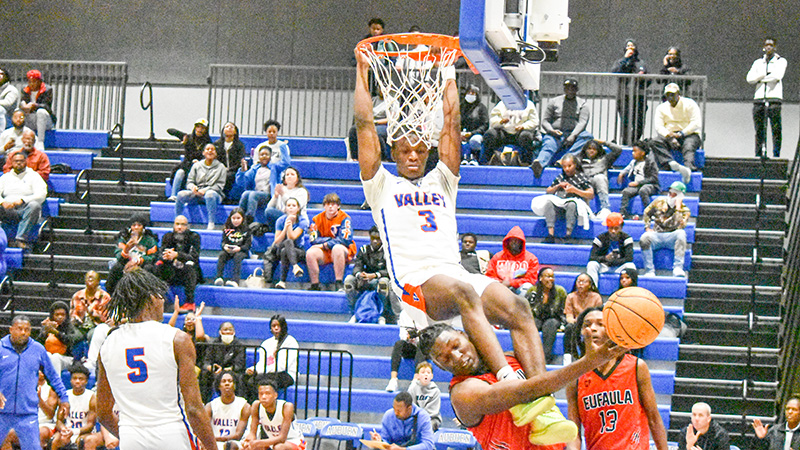 We don’t want to jinx it, and we certainly don’t want to look ahead, but it’s hard not to watch the Valley Rams boys basketball team and be impressed.

We’re writing this before Tuesday night’s game against Beauregard, but hopefully — barring an upset — the Rams will be 18-0 when we all wake up on Wednesday morning. (If not, 17-1 is impressive in its own right.)

Rams head coach Marshon Harper knows that everyone is gunning to be the team that hands Valley its first loss of the year. When you get to early/mid-January with a zero in the loss column, you’re no longer just another team on the schedule.

Harris County gave the Rams a run for their money Saturday, and Valley probably didn’t play its best. That’s what’s so difficult about actually running the table — some nights you just aren’t going to have it. The other team is going to make some shots, you’re going to be in a deficit — and some bounces may not go your way.

A Tuesday night game might be the game of the year for an opponent.

We know the team can’t stop to catch its breath, and we’re sure Harper would rather us not act like they’ve won anything yet (because clearly they haven’t). This certainly isn’t the time for the Rams to start reading the press clippings.

However, this start — 17 straight wins — is something that very few teams around the state can match. It’s a string of wins that very few, if any, teams in Valley High School history can match.

And that deserves some attention, probably beyond the headlines and stories on our sports page.

The road ahead will be a tough one. A 17 game win streak means nothing if the Rams trip up in the area tournament, sub-regionals or regionals. No one is going to lay down because of Valley’s gaudy record.

Nothing is given and no games are a sure thing. We realize that. It’s an uphill ride from here.

But on a day where we all woke up a little sleepy after watching what Georgia did to TCU in the College Football Playoff National Championship in a historic beatdown, we think it’s important to note that our own history is happening right here in Chambers County — even if it doesn’t necessarily have a storybook ending.  And it only adds to the story that this could be the last team that ever wears the name “Valley” on its jersey.

We wish the Rams luck as they continue on this year. We’re excited to see how the rest of this season goes.

OUR VIEW: Resolutions fail when you don’t take baby steps

OUR VIEW: Do not drink and drive this New Year’s Eve

OUR VIEW: Get that cold weather out of here