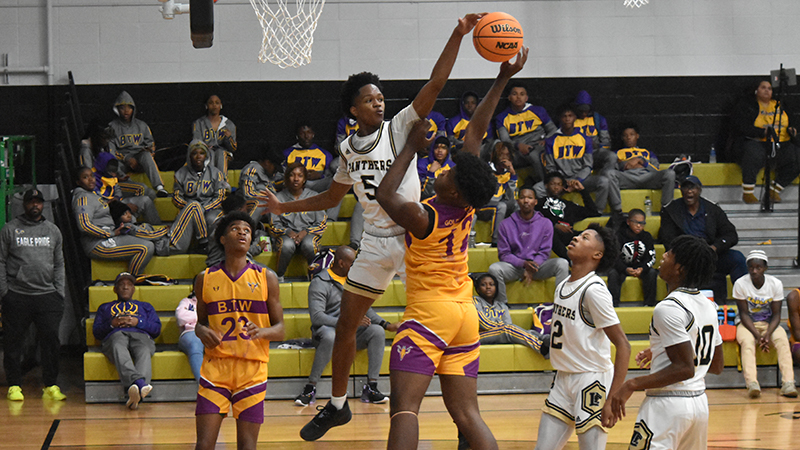 The Lanett varsity boys showed off the Panthers’ renovated gym with a bang as they overcame a 15 point deficit to beat Booker T. Washington 61-54 on Saturday.

Lanett head coach Tay McCants was thrilled to get the comeback win against a 4A team.

“We needed that one.”

Things were looking rough for the Panthers, especially after coming off of a rivalry loss to LaFayette on Friday.

Lanett came out of the gates a little slow as the Golden Eagles took a 19-4 lead toward the end of the first quarter.

The Panthers fought back to close the lead to 19-12 heading into the second quarter.

Lanett tried to close the lead in the second quarter, but the Golden Eagles continued to hit shots from the perimeter.

Booker T. Washington took a 31-21 lead at halftime, and McCants knew the slow start killed his team early on.

“Our guys were a little sluggish at the beginning,” McCants said.

“Once we got our defense going, we started capitalizing on turnovers. We made some quick baskets, and that’s what got us going.”

The third quarter was massive for Lanett as leaders like Elijah Whitfield and Nakia Bynum Jr. helped the Panthers charge back.

Whitfield overcame a poked eye to score four straight and close the Golden Eagle lead to eight in the third quarter.

Bynum scored six straight points including a three pointer to close the lead to two.

Booker T. Washington held a 42-39 lead heading into the fourth quarter, and Lanett used their momentum to swing the game in their favor.

Lanett didn’t have the lead until Bynum hit a layup to give the Panthers a 56-54 lead with a minute left.

McCants gave his guys a talk at halftime to help them come back.

“We needed to at least have it tied by the time we got to the fourth quarter,” McCants said.

“We had to pick up the intensity. We always lose the third quarter. We were pretty tired this morning, but we’re going to keep fighting until the end. We have area games next week, so a win against a big 4A team will get us rolling.”

McCants was also happy to be able to play in the new gym.

“We’ve been waiting for this for two and a half years,” McCants said.

“We’re ready to play. We still need to work on free throws.”

McCants was pleased with his bench players.

“I had a ninth grader, Ashton Autry, do really well tonight,” McCants said.

“He gave us energy in our 1-3-1 zone, and it’s important for guys to come off the bench. I’m ready to get these wins rolling.”