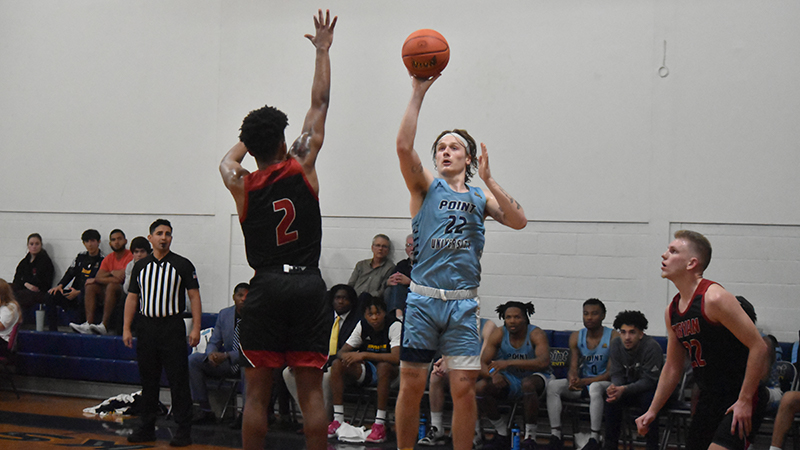 The Point men’s basketball team has been up and down this year, but the Skyhawks couldn’t overcome an early deficit in Point’s 79-74 loss to Appalachian Athletic Conference opponent Bryan on Wednesday.

Bryan was able to win on both sides of the ball as the Lions had to hold off Point for the entire second half.

Point’s leading scorer was Jack Gray, who had 17 points in 35 minutes on the court.

Skyhawk head coach Jake Deer explained how he tried to get his guys back in the game in the second half.

“I think it goes back to our game plan,” Deer said.

Despite bringing the game within 10 with five minutes left in the second half, Deer feels like his team could’ve done better.

“I think it was offensive rebounding,” Deer said.

“Fifty-Fifty balls were the difference in the game. That led to an open three or a kick out drive and score. I think it was all things that we knew what they did, and they just came out and executed better.”

Despite the loss, Deer was proud of his guys never quitting.

“I think we fought,” Deer said.

“Our guys battled for us. It’s the execution of the game plan to be able to play at a high level. Credit to Bryan. They did that better than we did. We played from behind the whole game. We need to play smart.”

The Skyhawks are approaching the end of the season, and Deer knows his team has work to do before the AAC Tournament.

“I think if you study us, we’re one of the best teams in the country. It just all comes down to offense,” Deer said.

“We have to get better in different categories offensively. We have to execute at a higher level. We have to make free throws and layups. I think we’re one of the best teams in the country defensively, so I wouldn’t change anything there.”

Deer feels like there’s one key to translate what they do in practice to games.

“It’s game time. We have a lot of immature players. They have to play more minutes.”

The Skyhawks outrebounded the Lions 33-30, but Bryan had 42 points in the paint compared to Point’s 34.

The Skyhawks drop to 11-11 on the season and will wrap up January with a road test against conference opponent Reinhardt on Tuesday.