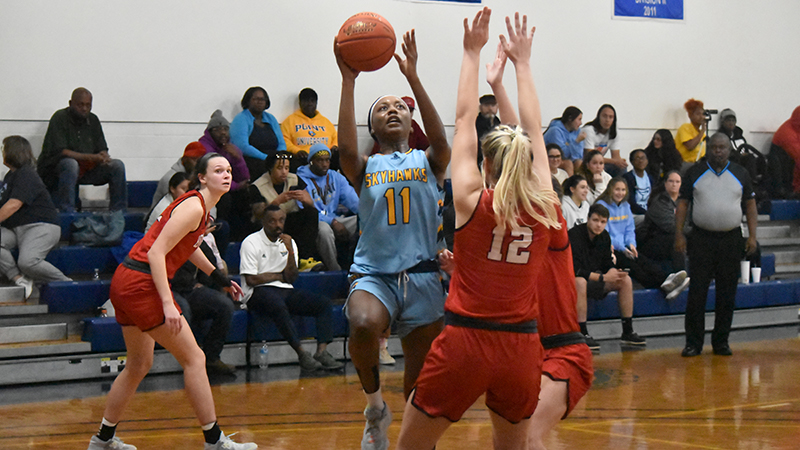 The Point womens’ basketball team tried to end a six year losing streak to Bryan College, but the Lions were too much in the Skyhawks’ 82-61 loss on Wednesday.

Point head coach Tory Wooley knew it was going to be a tough test.

“Bryan is a really good team. I’m proud of our girls in the system. We competed in the second half. We have to do a better job of guarding the three ball, but that’s a good team. We’re going to see them again in the conference tournament in about four weeks. I’m excited about what this is going to do for our team. It’s going to make us better, and we’re going to be fine.”

The Skyhawks kept it close as Bryan only had a 17-13 lead at the end of the first quarter, but the Lions were able to create some separation with a couple key threes to end the half.

Point was down 41-26 at halftime, and Ananda Hughley led the Skyhawks in scoring with eight points.

The second half wasn’t much better for the Skyhawks as Bryan’s offense continued to carve through Point’s defense.

Although Point took a tough loss, Wooley feels like his team still showed some fight.

“Our shots didn’t go in, but I still believe in my players,” Wooley said.

“We’ll be just fine. We need to guard the three ball. It’s just the little stuff. We have to take care of the ball. We have to rebound. If we fix those things, we’ll be fine.”

Wooley wants his players to keep their heads up.

“I believe in them,” Wooley said.

“We’re going to love on them and let them know they’re still champions.”

Marta Gimenez and Mataea Boyd were the leading scorers for the Skyhawks with 12 points each.