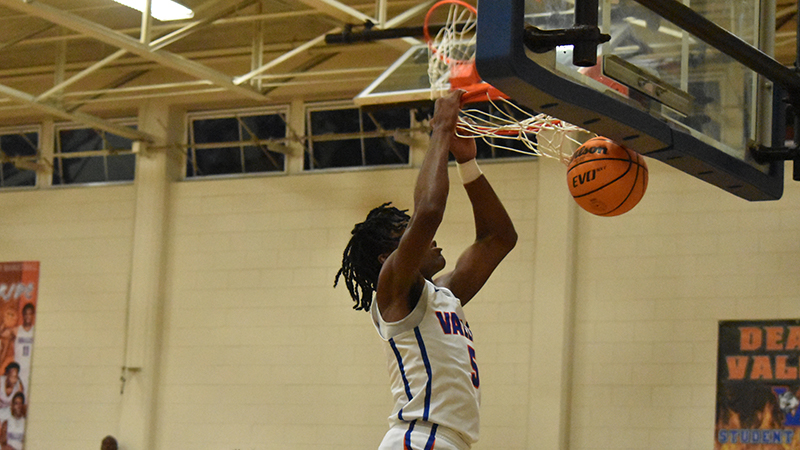 It wasn’t pretty, but the Valley Rams took care of business in their 62-53 win over Harris County to improve to 17-0 on the season.

“We didn’t play hard in the beginning. We played this team before and beat them by 20, so we came out too relaxed. I told them that everyone is going to try and beat us, so we have to give our best. We didn’t give our best effort. We’ll go back and watch some film. It was an ugly win, but I’ll take a win over a loss any day.”

The Rams took a 14-13 lead heading into the second quarter, and they let Harris County hang around in the first half.

Valley had a little momentum at the end of the second quarter when Jay Harper tipped in a missed shot at the last second to give the Rams a 32-25 lead at halftime.

Both teams fought back and forth in the third quarter, but Valley’s Cam Dooley created some separation for the Rams with back-to-back three pointers.

Valley took a 48-42 lead heading into the fourth quarter, and the Rams just controlled possession to win out the game.

Harper knows his team needs to not be complacent in games where they’re expected to win.

“We have to stay humble,” Harper said.

“We have to play team ball. We have to correct some things. Somebody wants to say they knocked us off. We have to get everybody’s best game. Hats off to Harris County. They did an unbelievable job. I’m proud of our kids. They fought through it.”

Harper knows that area play will be the most important part of the season.

“The mentality has to change,” Harper said.

“There are no given games. A lot of the guys played well tonight. Cam played well. Brandon played well. Jayden Thomas came off the bench and gave us some minutes. We have to rely on some of the bench players.”