Rams improve to 19-0 with massive win over Booker T. Washington 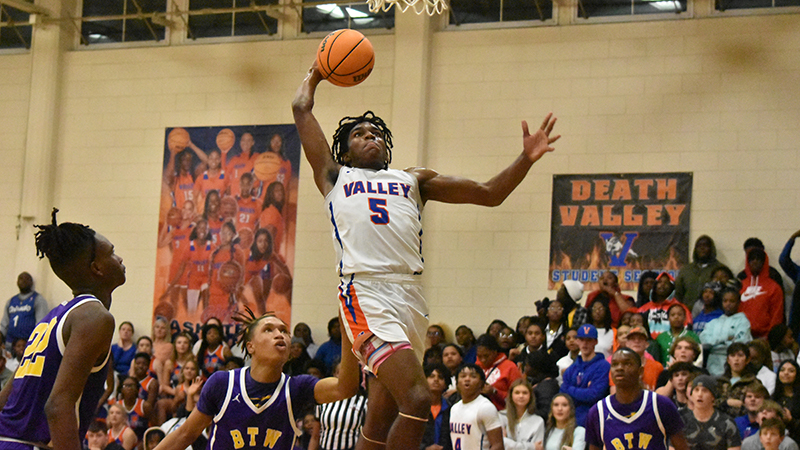 If anyone can stop the Valley Rams this season, it certainly won’t be the Booker T. Washington Golden Eagles.

Valley defended their home court with a dominant 78-62 win over the Golden Eagles to advance to 19-0 on the season and complete the sweep of Booker T. Washington.

Valley head coach Marshon Harper knows that his team has to keep working if they want to make it far into the postseason.

“I don’t know if we got comfortable or tired, but we didn’t come out with passion in the third quarter,” Harper said.

“We sucked it up in the fourth quarter and pulled it out.”

The Rams came out firing as Valley started the game on a 9-o run.

The Golden Eagles were able to close the Valley lead to five in the first quarter, but the relentless attack from Valley’s starting give proved to be too much for Booker T. Washington.

The Rams took a 22-12 lead heading into the second quarter, and the flood gates opened up from there.

Valley’s 20 second quarter points and a suffocating defense propelled the Rams to a 42-25 halftime lead.

Things got a little rough for the Rams in the third quarter as Booker T. Washington stormed to an 8-0 run in the early part of the quarter.

The Golden Eagles were able to bring it within 15, but Valley continued to pressure Booker T. Washington on offense.

The Rams took a 56-43 lead heading into the final quarter, but the Golden Eagles kept pushing.

Valley had to deal with the loss of star center Brandon Thomas, who took a hard fall in the fourth quarter.

The Golden Eagles brought it within 12, but Valley was able to increase the tempo and make sure Booker T. Washington didn’t get back in the game.

Even though his players looked tired in the third quarter, Harper was pleased that they opened the game with energy.

“It’s the next game,” Harper said.

Harper wants his team to make sure they stay focused when they take a big lead.

“We can’t get too relaxed, Harper said.

“We didn’t play as well on defense in the third quarter. Our intensity was down in the second half. It’s a long season. We have some bumps an bruises.”

Harper wants to use the state championship as motivation for his team.

The Rams will face a road test on Wednesday against a Handley team who hasn’t forgotten the controversial loss at Valley last week.

“It’s going to be a good test for us,” Harper said.

“It’s going to be a hostile environment. We have to get some wins on the road. We’re going to have to go out and play.”

The Rams have three games next week, so the players will have some rest before the schedule really heats up.

Cam Dooley was the leading scorer for the Rams with 22 points.