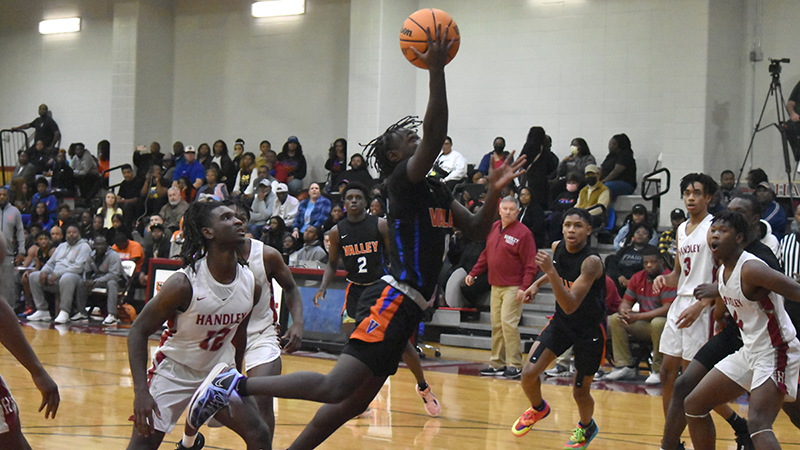 The Valley Rams walked into Handley’s gymnasium with a target on their backs as the Rams tried to advance to 20-0 on the season.

It wasn’t clean, but the Rams came out on top 75-63 despite being down at halftime.

Valley head coach Marshon Harper knew it was their toughest game yet.

“We came out hot,” Harper said.

“We just had to weather the storm. They had a run in the second quarter. We just took the will out of them. I’m proud of my team. We played hard. What can I say? We’re 20-0. We’re road tested. We’re home tested. We’re battle tested. We just play hard.”

The first quarter looked like the usual Valley game where the Rams came out flying on defense and wowed the crowd with dunks from Brandon Thomas and Cam Dooley.

The Rams set the tone early as they went up by as much as 11 in the first quarter and headed into the second up 20-12.

The second quarter was a complete 180 as the Tigers started to fly around on defense and even had a dunk of their own.

Valley couldn’t score in the paint, and Handley took all the momentum after making a 10-0 run and taking a 26-25 lead, the first for the Tigers.

There were three lead changes in the second quarter alone, but Handley took all the momentum into halftime after hitting a buzzer beater layup and taking a 34-32 lead.

The Rams came out strong in the third quarter and quickly took a six point lead thanks to players like Cam Dooley and Jamarious Martin.

Valley held the lead for the entire quarter, but the Tigers were able to keep it at 54-49 heading into the fourth quarter.

Valley started the quarter on a 6-0 run, and it gave the Rams the necessary cushion to control the rest of the game.

Handley tried to force turnovers and fight their way back, but Jamarious Martin’s ball handling led to the Tigers fouling instead.

Harper explained how Handley was able to grab all the momentum in the second quarter.

“They just got complacent, and they didn’t play good defense. Handley made a run, but we came out in the third quarter and did a good job.”

The Rams relied on their two stars, Brandon Thomas and Cam Dooley, but Harper is pleased with how guys like Martin and Denali Dooley stepped up when they needed to .

“Denali Dooley stepped up tonight. I’m proud of them. It was an unbelievable atmosphere. Handley has a good team. Hats off to the kids.”

Martin was the leading scorer for the Rams with 21 points.

Valley will return home on Friday for a key area matchup against Beauregard, who the Rams beat by 42 last week.

“We’re going to watch film and see what we did right and what we did wrong,” Harper said.