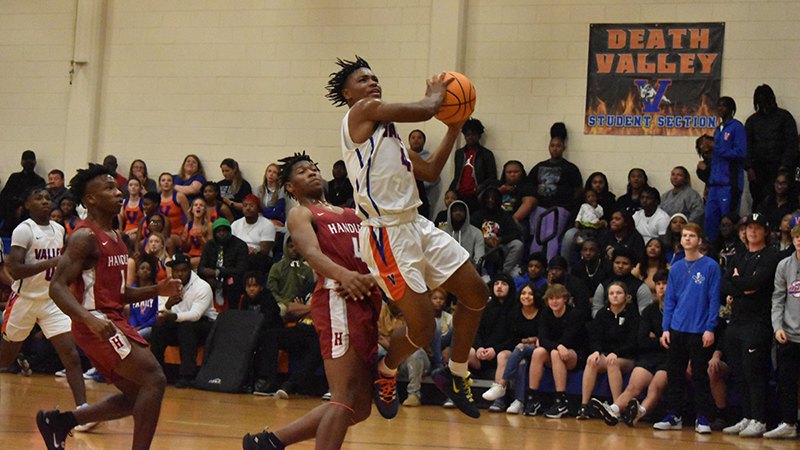 The Handley Tigers walked into Valley’s gymnasium expecting to knock off the undefeated Valley Rams, but a strong third quarter gave the Rams exactly what they needed to keep the win streak  alive in Valley’s 82-70 victory.

The game was one to remember as Handley packed the visitor section with fans, who weren’t exactly pleased with the officiating.

Three Handley fans, as well as Handley’s coach, were all ejected in the third quarter.

The resulting technical fouls gave the Rams the jump they needed to regain the lead after being down in the first half.

Valley head coach Marshon Harper knew it was going to be a chippy game.

“It’s one of those types of games we need,” Harper said.

“Handley’s a great team. They have a Clemson offered player on that team. Our kids fought hard. We were almost down by 10. I told them they were going to throw their best punch. I’m proud of my team. We stay poised.”

The Rams struggled to make shots in the first half, and the Tigers took a quick 17-15 lead heading into the second quarter.

Valley went down by four in the second quarter, but the Rams fought back to tie the game at 29 at halftime.

The Rams retook the lead in the third quarter and created some separation before things got out of hand.

After yelling from the Handley fans and the Tigers’ coach, the officials decided to eject the Handley’s head coach.

Valley scored 32 points in the third quarter to secure the victory, and Harper was able to keep his players composed when things got chippy.

“We just have to play ball,” Harper said.

“You just have to let the fans cheer because we’re only here to play ball. Hats off to the team. Our guys stayed poised. Our guys leaned on their teammates.”

The Rams played their starting five for most of the game, and Harper is proud of their toughness.

“I knew Handley was going to be very physical with us. We have another tough game tomorrow.”

The Rams lost to Handley in a four quarter battle during football season, and Harper feels like there was a bit of a rivalry since several of the players on the court played on the gridiron as well.

“We gave that game away,” Harper said.

“The kids believed in themselves. The kids knew it was going to be a rivalry game.”