Rebel perimeter attack too much for Cornerstone Christian 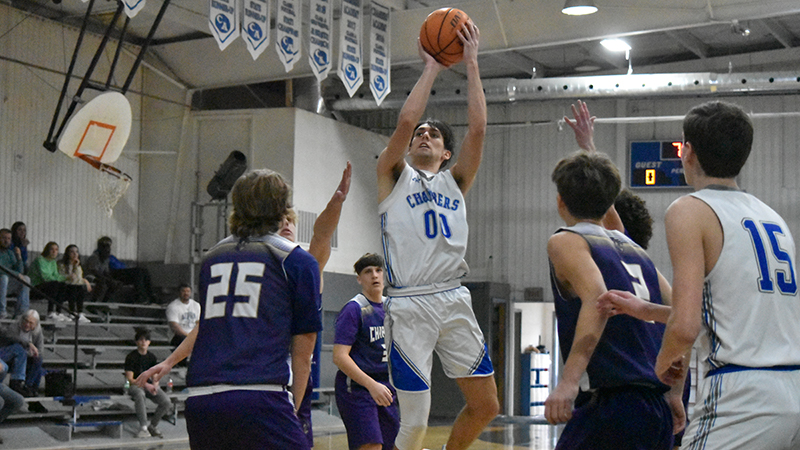 The Rebels dominated on the perimeter as Chambers Academy knocked down nine three pointers.

“We’re only letting them get one shot, which is big for us. We’re passing the ball a lot better. That’s how you play basketball.”

The Rebels came out firing as they couldn’t seem to miss shots from the perimeter in the first half.

The Rebels quickly took a 14-4 lead in the first quarter, and Chambers Academy was able to extend the lead.

The Chargers were struggling to hit shots while the Rebels were able to create shots on the perimeter and knock them down.

Hayley continues to be the leader of the Rebels, but Allen is pleased with how his other guys are stepping up.

“Levi Waldrop stepped up, but everybody is playing much better,” Allen said.

“Those two seniors are kind of taking the bulls by the horns and leading our team, so I’m proud of them.”

The third quarter was a little more relaxed for the Rebels but Cornerstone still struggled to land shots while the Rebels continued to win on offense.

The Rebels took a 54-25 lead at the end of the third quarter as Ryan Smith hit an underhand shot and drew a foul to keep the momentum.

Chambers Academy was able to play some of their bench players in the fourth quarter, and even they knocked down shots as the Rebels scored 23 in the final frame.

Allen wants to take this win and give his players confidence heading into area play.

Allen feels like his players have improved since the start of the season.

“We’ve gotten better with the things we focus  on,” Allen said.

“We’ve gotten better with the fundamentals of the game with boxing out, shooting and helping one another. A big part of our team is not letting people drive to the basket.”

Levi Waldrop was the leading scorer for the Rebels with 20 points while Hayley had 17.

The Rebels will have to continue the hot shooting as they face Lakeside on Tuesday.