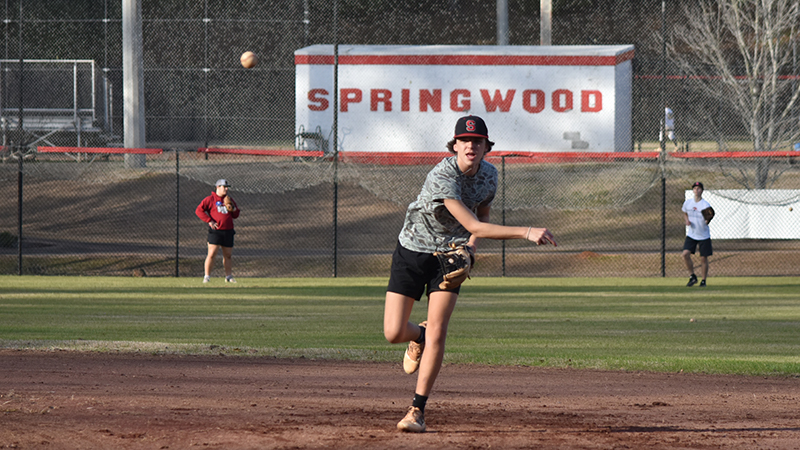 The Springwood baseball team is looking to build on their 2021 campaign as the Wildcats begin their second season under head coach David Hudson.

While the Wildcats are still missing their basketball players, Hudson is happy to have a full month of preparation before their first game.

“The biggest difference this year is that the players are used to me from last year,” Hudson said.

“We have six starters returning this year. With the six starters we have, they kind of know what I expect in practice. We’re starting off a lot better.”

Hudson feels like his players having a full year with him makes his job easier.

“It makes it so much easier because they know what to expect,” Hudson said.

“They’re focused. They come out here, and they’re getting after it. We’re working a lot on fundamental baseball. That’s what we’re going to continue to grow on that. That’s what we worked on last year.”

The Wildcats will open their season on Feb. 14 against Edgewood, but Hudson is worrying about his guys right now.

“We’re just focusing on the fundamentals of baseball,” Hudson said.

“We’ll do that all year. We’ll especially do that for the next three to four weeks. We’ll work on hitting and fielding. We’ll work on running bases.”

Although Hudson knows his team has work to do, he believes the Wildcats have one area of strength.

“The strength of our team is probably going to be our base running,” Hudson said.

“It was a huge part of our game last year. We’re very smart on the bases. We hit the ball very well last year, and I think that’s going to continue over to next year. Hopefully, we’ll be a good, basic, solid team. I tell the kids all the time that if they can make 80% of the routine plays and 50% of the ESPN plays, you’re going to be in ball games.”

Springwood is spending this week in practice on fielding.

“We have five seniors, and last year we had two. We have more participation this year. We had 11 kids on the team. We’re going to have 16 on the team this year.”

Hudson also knows that waiting on the basketball players to return will be a challenge, especially since the regular season doesn’t end until two weeks before baseball season begins.

“That’s hard because it’s a portion of the team,” Hudson said.

“I told my guys that basketball is a priority. If they don’t have practice, they can come out here and throw so they can get their arms in shape. They don’t even have to come at all. Their first priority should be basketball. It will be a challenge getting their arms in shape. We have to see live pitching. A lot of work needs to be done on their own. We’re trying to get everybody back used to playing baseball.”

Springwood finished last in the region last season, but they’ll have a chance to play more than 13 games this season.

The Wildcats haven’t released a full schedule yet, but Springwood will play 18 home games.