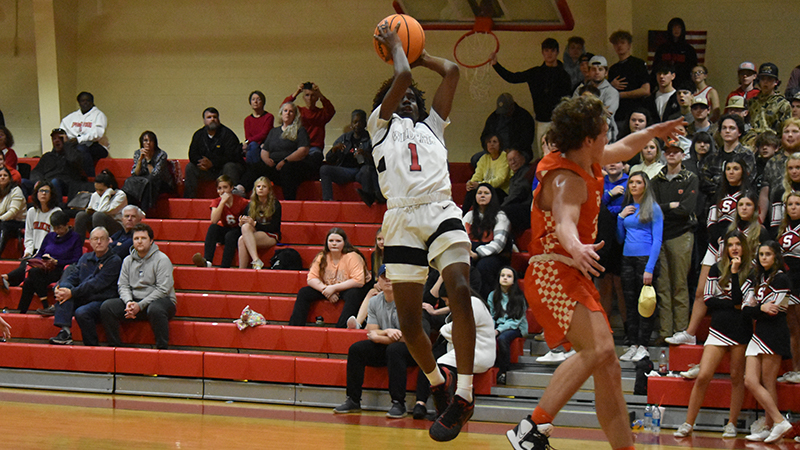 Springwood couldn’t contain Glenwood’s offense in the Wildcats’ 74-57 loss to the Gators on Tuesday.

The Wildcats hung in the game for the first three quarters but fell apart in the fourth.

“We talked at halftime about one shot and we rebound,” Sampson said.

“We got out of what we were trying to do as a team, and that hurt us. You have to be better against a team like that.”

The first quarter looked like it was going to be all Glenwood as the Wildcats struggled to land shots early on.

The Gators got off to a quick 10-1 lead, but it wouldn’t last long as Springwood’s offense found their groove toward the end of the first quarter.

Glenwood took a 21-14 lead at the end of the first quarter, but the Wildcats did just enough to make things more interesting in the second quarter.

Springwood capped off a 4-0 run with an Eli Westbrook contested layup that forced Glenwood to take a timeout with a 24-21 lead.

The Wildcats fought to close the lead, but Glenwood responded every time Springwood got close.

Springwood point guard Micah Thomas hit an equalizer toward the end of the second quarter to make it 28-28, but the Gators scored six straight to take a 34-28 halftime lead.

Springwood found life in the third quarter as the Wildcats tied the game at 36 at the start of the frame.

It didn’t take long before a layup from Eli Westbrook gave the Wildcats their first lead of the game at 40-39.

The Gators responded every time Springwood took the lead, and Glenwood took a 52-47 lead at the end of the third quarter.

Things went downhill for the Wildcats in the fourth quarter as Springwood struggled to stop the Gators on defense.

Although the Wildcats got off to a slow start, Sampson wanted her team to not panic after going down early.

“That’s what we talk about all the time,” Sampson said.

“You have to start fast and finish strong. We have a problem with that. We have to figure that out down the stretch.”

Despite the loss, Sampson was pleased with how her guys fought back in the third quarter.

“They bought in,” Sampson said.

“These guys fight like heck, and they’re a great group. We have to regroup and get ready for the last part of the season. I thought Micah [Thomas] played really well. He took it upon himself to score. You have to adjust how you’re playing defense when Micah is on the floor.”

Eli Westbrook was the leading scorer for the Wildcats with 21 points.

Springwood will look to bounce back as they travel to Lee-Scott on Thursday to face the Warriors, who beat the Wildcats earlier this season.